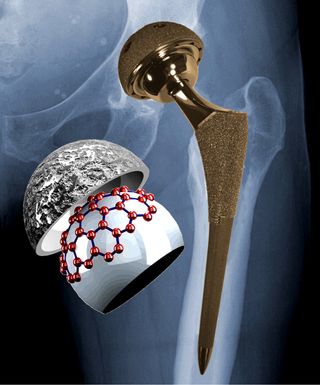 Shown here, an X-ray of the hip region with a metal-on-metal implant superimposed and a schematic illustrating graphitic material on the surface of the implant. The red spheres represent the positions of the carbon atoms in a single layer of graphite.
(Image: © Northwestern University)

Metal-on-metal hip implants are increasingly attractive to people with end-stage hip arthritis, particularly because the implants wear down slowly. Now a new study shows that the layer of lubrication that forms between the metal components of the implants has more in common with the lubrication of a combustion engine than that of a natural joint.

In the study, researchers tested the lubricating layer on seven hip implants that had been removed from patients for various reasons. They discovered that the layer was mostly made up of graphitic carbon, a solid lubricant used in engines.

The surprising discovery has important implications for the design of future metal-on-metal hip implants, the researchers said. Until now, scientists had assumed the layer was made up of degraded protein, similar to the lubrication in human joints.

"We now understand how the replacements are working, which means we can make [them] better," said lead researcher Laurence Marks, a material scientist at Northwestern University in Illinois.

Metal-on-metal hip implants, which have both a ball and socket made of metal, are used in about 35 percent of hip-replacement procedures in the United States. While not suited for everyone, the implants have several apparent advantages over implants that include plastic or ceramic.

Metal implants have thinner walls and larger femoral heads than those made of the plastic polyethylene, which reduces the risk of hip dislocation, explained study researcher Markus Wimmer, a professor of orthopedic surgery at Rush University Medical Center in Illinois. Metal-on-metal is also the only option for hip resurfacing procedures, which preserve some bone rather than completely replacing the hip. [How to Grow Old Gracefully]

Moreover, other types of hip implants may wear down quickly, posing a danger to patients. For example, when polyethylene wears down, it releases small particles into the body. "The particles are not good for the bone surrounding the polyethylene," Wimmer said. "Bone disappears around the implant, and the prosthesis gets loose."

The metal implants wear down slowly primarily because a lubricating layer develops on their surfaces. Wimmer helped discover this layer in 2001. "We had the feeling that it's really important, but we never knew what it was," Wimmer said. Most experts in the medical field assumed the layer was protein-based because protein is common in joint fluids.

To get to the bottom of the mystery, Wimmer collaborated with Marks. The duo and their colleagues examined under an electron microscope the lubricating layer collected from metal implants. "We noticed signs that there was some graphitic carbon in the layer, which was unexpected," Marks said. "We then went chasing to try to determine exactly what it was."

Tests using other electron and optical microscopes confirmed the lubricating layer is made mostly of graphitic carbon, and less than 5 percent of it is protein. It's still unclear where the graphite comes from, and this question is a target for future studies.

Next, the researchers want to find out if a lack of this graphitic layer can explain the failure of some metal-on-metal implants. They also want to make sure that the graphite is not causing any major harm in the human body.

Marks is interested in finding ways to improve the implants, such as designing them so that the graphite adheres better to the metal, or somehow promoting graphite formation in the body.

"What people have done in engines of racing cars and airplanes is quite amazing," Marks said.  "We can start by doing that in hip replacements, knee replacements and other types of replacements."

The study is published in the Dec. 23 edition of the journal Science.