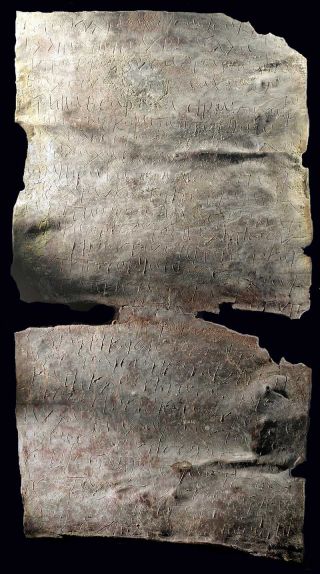 The curse tablet calls on Iao, the Greek name for Yahweh, god of the Old Testament, to strike down Babylas who is identified as being a greengrocer.
(Image: © Photo courtesy Professor Alexander Hollmann)

A fiery ancient curse inscribed on two sides of a thin lead tablet was meant to afflict, not a king or pharaoh, but a simple greengrocer selling fruits and vegetables some 1,700 years ago in the city of Antioch, researchers find.

Written in Greek, the tablet holding the curse was dropped into a well in Antioch, then one of the Roman Empire's biggest cities in the East, today part of southeast Turkey, near the border with Syria.

The curse calls upon Iao, the Greek name for Yahweh, the god of the Old Testament, to afflict a man named Babylas who is identified as being a greengrocer. The tablet lists his mother's name as Dionysia, "also known as Hesykhia" it reads. The text was translated by Alexander Hollmann of the University of Washington.

The artifact, which is now in the Princeton University Art Museum, was discovered in the 1930s by an archaeological team but had not previously been fully translated. The translation is detailed in the most recent edition of the journal Zeitschrift für Papyrologie und Epigraphik.

"O thunder-and-lightning-hurling Iao, strike, bind, bind together Babylas the greengrocer," reads the beginning of one side of the curse tablet. "As you struck the chariot of Pharaoh, so strike his [Babylas'] offensiveness."

Hollmann told LiveScience that he has seen curses directed against gladiators and charioteers, among other occupations, but never a greengrocer. "There are other people who are named by occupation in some of the curse tablets, but I haven't come across a greengrocer before," he said.

The person giving the curse isn't named, so scientists can only speculate as to what his motives were. "There are curses that relate to love affairs," Hollmann said. However, "this one doesn't have that kind of language." [6 Most Tragic Love Stories in History]

It's possible the curse was the result of a business rivalry or dealing of some sort. "It's not a bad suggestion that it could be business related or trade related," said Hollmann, adding that the person doing the cursing could have been a greengrocer himself. If that's the case it would suggest that vegetable selling in the ancient world could be deeply competitive. "With any kind of tradesman they have their turf, they have their territory, they're susceptible to business rivalry.”

The name Babylas, used by a third-century Bishop of Antioch who was killed for his Christian beliefs, suggests the greengrocer may have been a Christian. "There is a very important Bishop of Antioch called Babylas who was one of the early martyrs," Hollmann said.

The use of Old Testament biblical metaphors initially suggested to Hollmann the curse-writer was Jewish. After studying other ancient magical spells that use the metaphors, he realized that this may not be the case.

"I don't think there's necessarily any connection with the Jewish community," he said. "Greek and Roman magic did incorporate Jewish texts sometimes without understanding them very well."

In addition to the use of Iao (Yahweh), and reference to the story of the Exodus, the curse tablet also mentions the story of Egypt's firstborn.

"O thunder—and-lightning-hurling Iao, as you cut down the firstborn of Egypt, cut down his [livestock?] as much as..." (The next part is lost.)

"It could simply be that this [the Old Testament] is a powerful text, and magic likes to deal with powerful texts and powerful names," Hollmann said. "That's what makes magic work or make[s] people think it works."