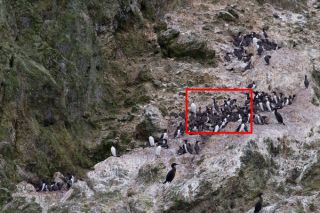 Earlier this year, government scientists discovered a welcome bundle of joy: a nest of seabird chicks on the Channel Islands off California's coast. This is the first time baby birds of this species have been seen here since 1912.

Researchers from the U.S. Geological Survey (USGS) and the National Park Service (NPS) discovered the California Common Murre (Uria aalge californica) chicks last July. The football-size seabirds are members of the auk family (Alcidae) and resemble black-and-white species of penguins. Like penguins, murres use their wings to "fly" deep underwater, but unlike penguins, they also fly in the air.

Historically, murres nested on Prince Island, a small islet off San Miguel Island within Channel Islands National Park. This colony disappeared nearly a century ago, likely as a result of human disturbance and egg harvesting.

In California, Common Murres are most abundant off central through northern California, with tens to hundreds of thousands of birds nesting at the Farallon Islands, off Trinidad Head, and at Castle Rock National Wildlife Refuge. Smaller colonies are found farther south, on nearshore islets along the Big Sur coast and, now, once again on Prince Island.

"This is an exciting finding — certainly a historic one," said Josh Adams, a seabird ecologist with the USGS Western Ecological Research Center. "The murres appear to have reestablished their former southern range, perhaps benefitting from present ocean conditions."

"Conditions in the Santa Barbara Channel have been exceptionally productive during the past decade," Adams said in a statement. "Although many factors affect population redistribution and recovery, no doubt the murres at Prince Island are benefiting from relatively cool summertime waters, increased ocean productivity, and changes in forage-fish availability."

The new colony is perched on 100-foot-high (30 meters) sea cliffs and was spotted by Adams, USGS biologist Jonathan Felis, and their Channel Islands National Park colleagues Laurie Harvey and David Mazurkeiwicz during research trips to this remote windswept island.

With this murre colony, Prince Island now hosts 13 nesting seabird species, making it one of the most important and biologically diverse nesting habitats on the West Coast of North America, according to a USGS statement.