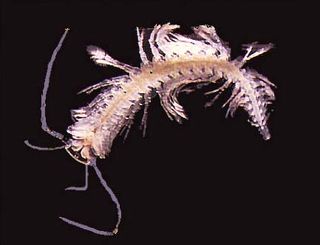 A crustacean that has fangs connected to secretory glands, from the stygofauna at Cape Range, Western Australia. This is a very primitive group of crustaceans, previously only known from the northern hemisphere.
(Image: © Australian Center for Evolutionary Biology & Biodiversity, University of Adelaide.)

The Australian Outback is hot, dry and desolate. But just under the surface it is teeming with life.

"When the discovery was first made, we didn't really believe it,"said team leader Andy Austin, professor of biology at the Australian Centre for Evolutionary Biology & Biodiversity at the University of Adelaide. "We thought maybe it was unique to just three or four locations."

Instead, they have found the tiny creatures, including small crustaceans, spiders, beetles and worms, in nearly every bore hole they've looked down. [Images: Underground Creatures]

Hiding under the desert

Years ago, it was obvious that stygofauna—small animals that live within groundwater systems —were typical in European countries, which are wetter and more temperate.

Australia was once a wetter, lusher environment—nearly like a rainforest —before it began drying out around 15 million years ago. Some of the small invertebrates that were in aquatic environments many years ago took refuge in subterranean environments, whereas today, "what you get on the surface is an array of vertebrates of more recent origin,"Austin told OurAmazingPlanet.

The advent of DNA barcoding in the past few years has helped speed the discoveries.

In earlier times, biologists would use physical traits like size, shape and color to try to identify species out in the field. But with advancements in DNA sequencing, now it is much cheaper and easier to look at genetic material to tell species apart.

For all fauna, DNA barcoding looks at the same short genetic sequence in each species. That area is known to be unique between each species, helping to distinguish different species that might appear similar to the human eye.

The purpose of discovering the species is to better understand the biodiversity under the desert and maybe understand its origins, but also to protect them. Australia has a very active mining industry, and in Western Australia, mining companies have to show that their work won't cause the extinction of any species. Austin said that many mining companies work actively with the researchers so that they understand the environment they're drilling into.

The benefit of quickly and accurately identifying species using DNA barcoding also goes far beyond the Australian red center. DNA barcoding is being used for everything from identifying timber species to cut off illegal logging distribution chains, to identifying fish that are being sold as another species.

"There's a range of applications we're just starting to see,"Austin said. "It's great for when you rapidly need to understand what something is."

In the Australian Outback, there are still likely thousands more invertebrates to be discovered.

The Outback is not alone, either. Austin said that other continents, like Africa and South America, likely have thousands of undiscovered stygofauna.

"If you start multiplying this on a global basis,"he said, "there's likely to be massive diversity that will be uncovered in coming decades."