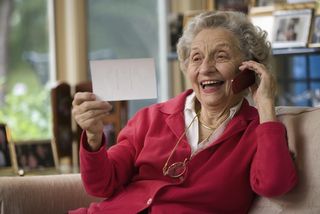 A new Gallup poll finds that a little social time each day, even over the phone, gives seniors a big happiness boost.
(Image: © EdBockStock, Shutterstock)

Americans 65 years of age and older maintain a happy outlook with less social time than their youthful counterparts, according to a new survey.

It takes about three hours a day of socializing with friends and family to boost seniors' happiness by around 20 percent, the new Gallup analysis found. For Americans younger than 30, it takes at least six hours of social time to achieve that well-being boost.

Social time is important across all age groups, and research has shown that an active social life can even decrease the risk of Alzheimer's and other dementias in the elderly. In older gay and lesbian individuals, researchers believe that higher rates of physical and mental health problems may be attributable to a lack of family and social support, according to a report released in March 2011.

The new analysis relied on self-reports from a random sample of 31,486 U.S. adults who were interviewed via landlines and cellphones. The results were weighted by gender, age, race, ethnicity, education, region and other demographic characteristics to approximate the general U.S. population.

But although they spend less time gabbing with friends and relatives, older adults seem to get a bigger boost from the hours they spend with others. Sixty-seven percent of seniors who spent three hours a day socializing the day before the survey said they felt a lot of enjoyment and happiness without much stress and worry that day. Only 33 percent of 18- to 29-year-olds who socialized for three hours said the same.

Forty-four percent of seniors who hadn't socialized at all the day before reported happiness without stress, compared with 26 percent of the younger age bracket. To get the 23-percent happiness boost that seniors experienced with three social hours, 18- to 29-year-olds would have to socialize more than six hours a day.

Previous Gallup surveys have found that Americans' well-being rises after age 60, whether respondents are working or retired. The findings don't suggest that seniors can retreat from social life without consequence, Gallup reported, but they do suggest that seniors have a special emotional resilience.

"It may be comforting to know that Americans' emotional state does not necessarily suffer as the average time they spend daily in the company of others declines with age," the polling agency reported.