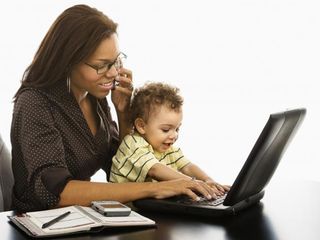 Mothers who have jobs are healthier than those who are not employed, at least when their children are very young, a new study finds.

Working mothers in the study were less depressed and reported better overall health than moms who stayed at home with their young children, though this benefit of working did not extend into children's school years.

There was no difference between the health of mothers who worked part time and those who worked full time, the researchers said.

Stay-at-home moms may be more socially isolated than working moms, which might increase their chances of being depressed, the researchers said. Stay-at-home moms might also be under more stress as a result of being at home with their children all day. This stress may be relieved somewhat when their children start school, which may explain why the link disappeared when children entered preschool.

The results are based on interviews, starting in 1991, with 1,364 mothers from Arkansas, California, Kansas, Massachusetts, North Carolina, Pennsylvania, Virginia, Washington and Wisconsin . Researchers interviewed women throughout their children's infancy, preschool years and into elementary school.

The researchers defined working part time as working one-to-32 hours per week. About 25 percent of mothers were employed part time during the study period, although mothers moved in and out of part-time work. Mothers reported whether they experienced symptoms of depression and rated their overall health as "poor," "fair," "good" or "excellent."

The mothers also answered questions about conflicts between their work and family lives, and how involved they were in their child's schooling.

Working moms reported fewer symptoms of depression and were more likely to rate their health "excellent," compared with nonemployed mothers, according to the study.

Couples' emotional intimacy did not appear to be affected by the mothers' employment status: the level of emotional understanding between partners was similar for working moms and stay-at-home moms.

The findings in the study held even after the researchers took into account factors that could have influenced the results, including the mother's education and certain personality traits.

The researchers noted they examined the mother's well-being in relation to one child only, and additional siblings should be considered in future studies.

Pass it on: Working moms are healthier than stay-at-home moms when the kids are young.