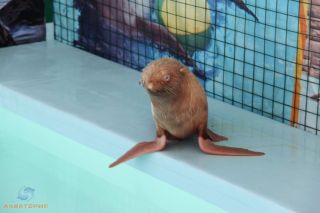 An adorable albino seal pup who was rejected by her family has found a home — and her own webcam — at a Russian dolphinarium.

A Russian photographer first came upon the tiny, lone seal on Tyuleniy Island, a small island located in the Sea of Okhotsk, in September. The young pup had been rejected by her family members, who have black coats, because of her rusty brown fur and pale blue eyes.

The seal has since been adopted by the Akvatoria dolphinarium in Adler, Russia, where she has her own special, brightly colored enclosure with a pool. Her rescuers gave her the name Nafanya after a Soviet-era cartoon character with similarly colored fur. [In Photos: Abandoned Albino Seal Pup Gets Her Own Home ]

Dolphinarium personnel also created a website for Nafanya, which features a webcam that documents her day-to-day activities as she swims and plays in her enclosure. After her monthlong quarantine is complete, Nafanya will be introduced to the other seals living in the dolphinarium.

You can watch Nafanya's webcam here, but since it is on Moscow time, it is only available to view between 8 p.m. and 2 a.m. EST.

In the wild, animals are sometimes rejected at birth and left to fend for themselves if they have a deformity, genetic defect or even just look different. Although albino babies are not always rejected in the animal kingdom, they may face other challenges, such as vision problems, sensitivity to sunlight and having a harder time hiding from predators due to their lack of pigmentation.