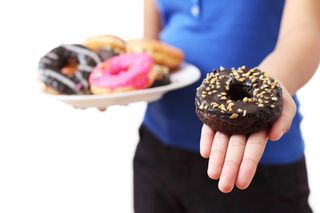 Snacking between breakfast and lunch might ding your diet more than snacking at other times of the day, a new study suggests.

The urge to grab a snack during the relatively short time between breakfast and lunch could be a sign of generally less healthy eating, the researchers said.

Midmorning snacking "might be a reflection of recreational or mindless eating habits, rather than eating to satisfy true hunger," said study researcher Anne McTiernan, director of the prevention center at Fred Hutchinson Cancer Research Center in Seattle.

The study is published online Nov. 25 in the Journal of the American Dietetic Association.

The study included 123 overweight and obese women between the ages of 50 and 75. The participants were taking part in a larger study designed to help them lose weight, and to examine the effects of diet and exercise on breast cancer.

Women who snacked in the morning were more likely to snack more frequently throughout the day. The study showed that 47.8 percent of those who ate a midmorning snack reported they ate three or more snacks daily, while 38.9 percent of women who ate a snack in the evening reported eating that many snacks.

In general, eating healthy snacks can help dieters reach their goals by staving off hunger, the researchers said.

“Snacking could be part of a dieter’s toolkit, if they’re eating in response to true hunger," McTiernan said.

But instead, studies have found that eating habits in the U.S. are changing — eating is increasingly influenced by cues other than hunger, and people are eating more frequently, the study said. In other words, eating is becoming more "mindless."

And the problem with that is that mindless snacking racks up extra calories, but doesn't mean that we'll eat any less at our next meal, according to the study.

A study published this month showed that people who snack have diets that are slightly healthier overall than people who don't snack. Snackers ate more fruit and more whole grains than people who didn't eat snacks, that study found.

"Individuals undergoing dietary weight-loss programs should be educated on ways to healthfully incorporate snacks into the diet," the researchers wrote in the conclusion of the study.

Pass it on: Feeling the urge to eat a snack before lunchtime might be a sign that your eating habits are not as healthy as they could be.