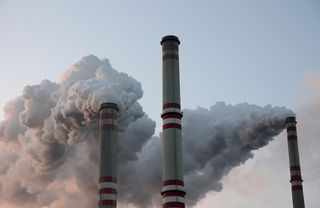 Both outdoor and indoor air pollution may pose a threat to Leonardo da Vinci's masterpiece "The Last Supper," according to the researchers.
(Image: © Danicek | Dreamstime)

Housed in Milan, one of Europe's dirtiest cities, Leonardo da Vinci's masterpiece "The Last Supper" still faces a threat from air pollution, researchers say, despite preventative measures that have significantly decreased pollutants in the church where the famous painting is on display.

In 2009, Italian authorities installed a sophisticated heating, ventilation and air-conditioning system in the refectory of Santa Maria delle Grazie to protect the painting from Milan's polluted air.

To see whether the system improved air quality, a team of researchers led by Constantinos Sioutas, a professor of civil and environmental engineering at the University of Southern California, placed two air-quality monitors inside the church for a year to collect samples from around the painting. Results showed the levels of fine and coarse particles were reduced near the painting by 88 percent and 94 percent, respectively, compared with the corresponding outdoor levels.

"It's a spectacular reduction," Sioutas said in a statement. "It is, frankly, very impressive."

Although the researchers applauded the successful decrease in particulates around the da Vinci painting, they warned that indoor sources of pollution may still pose a threat to the priceless painting. Fatty lipids from the skin of patrons in the church appeared in significant quantities around the painting, despite the fact that visitor access to the artwork is strictly regulated.

Only a few visitors are allowed inside the church at a time, and they enter the building via an airlock-style chamber and can stay for only 15 minutes each. However, airborne fatty lipids from visitors' skin can combine with dust in the air and soil the painting if they come in contact with it, said study researcher Nancy Daher, of the University of Southern California.

Even previous restorations of the painting may sully its surface, Daher said. Minuscule particles of the wax applied during early repair efforts can be emitted from the painting, get into the air and tarnish the painting in the same manner as the fatty lipids.

The researchers noted that their air-sample analysis could be used as a point of reference for future studies aimed at protecting valuable artwork and artifacts.

The study will be published this month in the journal Environmental Science and Technology.