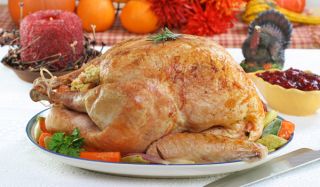 Turkey is the priciest item on the Thanksgiving dinner menu, coming in at $21.57 this year, compared with $17.66 in 2010, according to the price survey.
(Image: © Rosemary Buffoni | Dreamstime)

Faced with rising food prices, shoppers may feel the pinch as they pick up their holiday staples at the supermarket. The cost of a traditional Thanksgiving dinner, including all the basic trimmings, has increased by about 13 percent since last year, according to an annual price survey.

The average cost of this year's Thanksgiving meal for 10 people is $49.20, which is a $5.73 price increase from the average of $43.47 in 2010, according to an American Farm Bureau Federation (AFBF) annual informal survey.

For the survey, AFBF researchers asked 141 volunteer shoppers from 35 U.S. states to look for the best possible prices when shopping for items from a set menu, which has remained unchanged since 1986. To accurately gauge price trends around the nation, researchers asked the shoppers to refrain from using special promotional coupons or purchase deals, such as spending $50 at a store and receiving a free turkey.

Turkey — that Thanksgiving necessity — was the priciest item on the menu, coming in at $21.57 this year, compared with $17.66 in 2010. That's an increase of about 25 cents per pound, making the bird the biggest contributor to the final cost of the meal and the one item on the menu to experience the largest price increase in 2011.

"Turkey prices are higher this year primarily due to strong consumer demand both here in the U.S. and globally," John Anderson, an AFBF senior economist, said in a statement. [Infographic: Rising Thanksgiving Costs]

The only two items to show a price dip: A 1-pound relish tray of carrots and celery dropped by 1 cent, while a group of "miscellaneous ingredients" necessary to prepare the meal, including eggs, sugar, flour, evaporated milk and butter, decreased by 12 cents.

"Although we'll pay a bit more this year, on a per-person basis, our traditional Thanksgiving feast remains a better value than most fast-food value meals, plus it's a wholesome, home-cooked meal," Anderson said.