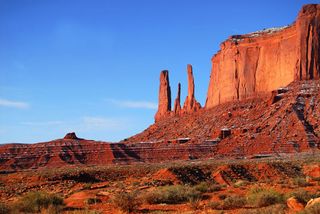 While other tribes have disappeared from North America over the centuries, the Navajo Nation has done the opposite. Two geographers from the University of California, Los Angeles, offer an explanation for why the Navajos have been able to grow to more than 300,000 members today: a combination of geography and culture.

Jared Diamond and Ronan Arthur propose that the geographical isolation and cultural flexibility of the Navajos, who call themselves the Diné, allowed them to expand, even after the arrival of Europeans in North America in 1492 and efforts four centuries later to assimilate them into white U.S. culture.

"Many tribes decreased their numbers, disappeared or lost their homeland, language or cultural identity," Arthur and Diamond write in the Nov. 18 issue of the journal Science. "The Navajos are a striking exception."

In fact, they are arguably the largest American Indian tribe in the United States. (The Cherokee Nation, with different membership requirements, also can make that claim.) And the Navajo reservation, established in 1868, has expanded from roughly 3.3 million acres to more than 17 million in Arizona, Utah and New Mexico. [7 (Billion) Population Milestones]

The reasons for success

In their brief article, Arthur and Diamond argue that just enough isolation in their homeland in the southwestern U.S. made them less accessible to Spanish, Mexican and U.S. armies (although many were rounded up in 1864 and imprisoned at Fort Sumner in New Mexico for four years). That remoteness also allowed them to remain relatively independent while trading with Spanish and American settlers, Arthur and Diamond argue.

What's more, Navajo land was rugged and dry, making it less desirable as farmland for white settlers; and resources such as oil and coal weren't discovered there until the 20th century.

The authors also point to cultural factors: Navajos selectively adopted new practices while retaining their identity, which allowed them to avoid a pitfall of other tribes. Navajo are also inclusive, incorporating individuals, clans and spouses from neighboring peoples, such as the Pueblos and Apache groups, they write.

"Arthur and Diamond have done a good job in presenting geographical and cultural factors that promoted the expansion of the reservation and the Navajo population," Peter Iverson, a historian whose work provided source material for the geographers and who provided feedback to them, told LiveScience by email. "Given space limitations [in the journal], they cannot furnish a comprehensive overview, but I do think they have made a conscientious effort."

The story of the Navajo people runs counter to the themes of tragedy and victimization that run through American Indian history, said Iverson, an Arizona State University emeritus professor of history. "I don't think we have given them sufficient credit for the staying power they have demonstrated," he said.

Iverson pointed to a number of other factors that ultimately set the Navajo up for success. In 1887, the federal government sought to divide up Indian lands for individual ownership, a step leading toward the eventual demise of native tribes. The Navajos successfully fought this initiative and avoided seeing their land splintered. They also set about acquiring land to add to the reservation, which ultimately resulted in its dramatic expansion.

"In the late 19th century, they realized they were in it for the long haul," Iverson said.

Initially, Navajos resisted education offered by the American government, which included harsh boarding schools intended to help their children assimilate into white culture. But other developments, such as a federal program in the1930s that eliminated most of the livestock upon which the Navajo relied, prompted them to embrace it.

About half of Navajos today speak their native language, according to the Science article, but Iverson fears that estimate is high.

"I think it's been an enormously important factor in their cultural vitality, but it is more fragile now than perhaps the article suggests," Iverson said. "The young people today, for the most part, are not fluent in the language."

While their reservation is accessible by modern roads and railroad, it was a more isolated place before about 1920, according to Iverson. But even in the 1880s the Navajos had to deal with federal normalization efforts. Christian missionaries also were active, Iverson wrote in an email.

Navajos do have an impressive ability to incorporate new elements into their culture, a trait that shows up in their silver work and weaving, he added. For instance, the Navajo squash blossom design, common in jewelry, incorporates a crescent-shaped pendant, an element that had its origin in the Islamic world and arrived with the Spanish.