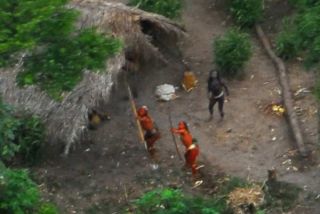 This photo and caption released by Survival International on May 29, 2008, caused a stir: Uncontacted Indians in Brazil seen from the air, May 2008 © Gleison Miranda/FUNAI

Arial photographs released in May by the Brazilian government of an "uncontacted" tribe deep in the Amazon have generated a sense of wonderment back here in civilization. Even today, in this age of computers and globalization, there still exists groups of humans living as their ancestors have lived, basically unchanged for thousands of years.

This tribe and similar ones in "Brazil" and particularly near the Brazilian and Peruvian "border" — words that mean nothing to these people — have been known about but likely have had no contact with outside groups for generations or perhaps ever.

And so, the society that has created Star Trek is asking, what do we do now? Shall we teach them democracy and how to French kiss?

These indigenous Amazonian societies may seem alien, but theirs is a life much like ours, with joy and sorrow, comfort and hardship, pleasure and pain.

The biggest health misconception is that we, with our modern technology, can improve their quality of life. This has rarely been true. Nearly every encounter between an indigenous group and so-called modern society has been disastrous for the former.

But first, another misconception: that life in the Amazon is a Garden of Eden, where innocent natives lie around in hammocks all day as food falls from trees and into their bowls.

Like the biblical Garden, there are indeed snakes, many of which are deadly. There are also various infectious diseases that prevent many babies from growing into adults and that prevent many adults from living past age 60.

But even Dr. Leonard "Bones" McCoy can't improve their health. Interaction with outside groups inevitably brings foreign diseases, a loss of culture, depression and a decrease in the quality of life and life expectancy.

Change, for these people, is far deadlier than yellow fever or other dangers of the rain forest.

The results of Europe's conquest of the Americas are well known. Nearly 90 percent of the indigenous populations were wiped out, often by wholesale slaughter but mostly through the introduction of disease and subsequent despair.

By the 20th century, however, the threat faced by indigenous populations became more insidious — a life devoid of life. One can witness this today on many Native American reservations in the United States and Canada, with epidemic levels of depression, suicide, alcoholism and diabetes, a disease that never existed in these cultures before the introduction of the white man with his white sugar and white bread.

In Australia, Aborigines forced to resettle live ten years less on average than those still living on their native homelands and up to 20 years less than non-indigenous Australians, according to data compiled by Survival International, a UK-based group advocating for indigenous peoples.

As with Native Americans and, for that matter, many of the populations in the South Pacific Islands, Aborigines are faced with astonishingly high rates of diabetes — as high as 50 percent in some communities — along with the depression that comes from a loss of culture and livelihood.

Clashes with natives live on today in Southeast Asia and the Amazon, where within the last 50 years almost every encounter has brought a sharp decline in the length and quality of life. Threats to these populations include loggers, who lay barren their land, and evangelists, who perhaps with good intentions eradicate their culture.

Whose life is better — theirs or ours — can never be determined, for the answer is subjective. We have real joys, such as the ability to travel and learn about the world. They have joys we cannot comprehend.

The "uncontacted" tribes of the Amazon are not primitive; it takes an advanced culture to survive in this dangerous natural terrain. The only thing primitive is our notion that what we have is better and needs to be forced upon them.