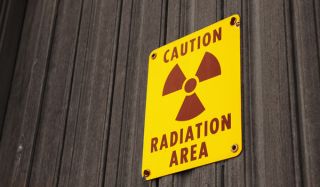 Trace amounts of the radioactive material iodine-131 have been detected across Europe over the past two weeks, according to nuclear officials there. The source of this radiation-spewing material is unknown.

Iodine-131 is a by-product of the type of nuclear fission reactions that occur in reactors and nuclear weapons; it emits radiation that can cause cancer when absorbed in high enough doses. The International Atomic Energy Agency (IAEA) said the levels of iodine-131 that have been detected in several locations across Europe are abnormally high, but not high enough to pose a public health risk, Reuters reported today (Nov. 11).

Austria's Environment Ministry said the small levels of radioactive iodine it detected would expose the population to a radiation dose equal to just one-40,000th of the dose received in a transatlantic flight.

Nonetheless, the IAEA is on the hunt for the source of this free-flying nuclear fission product, which the agency does not believe to be a remnant of the nuclear disaster in Fukushima, Japan, earlier this year. Iodine-131 decays quickly, with a half-life of just eight days.

The uptick in radioactive iodine was first detected in late October by the Czech Republic's Office of Nuclear Safety, and has since been measured elsewhere, the IAEA said.

Paddy Regan, a professor of nuclear physics at Britain's University of Surrey, told Reuters that the iodine may have leaked from a radiopharmaceuticals manufacturing plant. Alternatively, it may be leaking from a hospital, he said, as these often keep supplies of iodine in store.

Massimo Sepielli, head of the nuclear fission unit at Italy's national alternative energy body ENEA, suggested several other possibilities: "It could be coming from the transporting of [nuclear] material, it could come from a hospital ... it could even come from a nuclear submarine, even if it's a more complicated possibility ... but you can't rule that out."