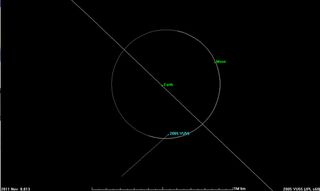 This still from a NASA animation by Jon Giorgini of the Jet Propulsion Laboratory shows the trajectory of asteroid 2005 YU55 as it passes between Earth and the moon on Nov. 8, 2011.
(Image: © JPL)

An asteroid four football fields long will pass near Earth on Nov. 8. A space rock this big hasn't come this close in 35 years: It will fly by at a distance of just 201,700 miles (325,000 kilometers), which is actually inside the orbit of the moon. NASA has assured the world that the asteroid, officially named 2005 YU55, poses no threat to our planet. But what about our planet's loyal sidekick? Is the moon in danger?

Don Yeomans, director of NASA's Near-Earth Object Program Office at the Jet Propulsion Laboratory in Pasadena, Calif., said 2005 YU55 will not hit the moon. While the space rock whizzes past the planet at a clip of 30,000 miles per hour (13 km/s), the moon will be about a fourth of its way to the opposite side of Earth. Like two ships passing in the night, they'll miss each other by more than 150,000 miles (240,000 km).

But, out of curiosity, what if 2005 YU55 were on a collision course with the moon? Is it big enough to do major damage?

"It would be a significant event on the moon, certainly," Yeomans told Life's Little Mysteries. "It wouldn't move the moon around at all, but it would cause a significant impact crater … at least 4 kilometers [2.5 miles] wide. That's significant, but still a pretty small crater in terms of the hierarchy of lunar craters."

An asteroid the size of 2005 YU55 impacts Earth about once every 100,000 years, Yeomans said, and because the moon is a much smaller target than Earth, such an event happens on the moon only once every several hundred thousand years. But because our satellite has no atmosphere, no erosion and no tectonic activity, all the impacts it has ever experienced remain imprinted on its surface. [What Would Earth Be Like If the Moon Had Never Formed?]

If the 400-meter-wide asteroid were to impact the moon, it would kick up enough dust — and that dust would moving at a high enough speed — for a small quantity to escape the moon's gravity and coast all the way to Earth, 240,000 miles away, Yeomans said. While much of the blast debris would burn up in our atmosphere, some fragments might make it to the ground. This has happened during past asteroid-moon collisions. "We know of lunar meteorites that have made it."

For an asteroid to completely destroy the moon, peppering Earth with huge lunar chunks and potentially jeopardizing life here (which may depend on the moon for many biological processes), the impactor would have to be almost moon-sized. "Only something not a whole lot smaller than the moon itself could do that," Yeomans said. "There are no asteroids large enough to do it that we know of. The largest near-Earth asteroid that crosses Earth's orbit is only about 8 kilometers [5 miles] wide."

Yeomans adds that no one need worry about the fate of their favorite space orb: "I just want to emphasize that the fact we have so much optical and radar data on [2005 YU55] means that we know there's no chance it can get dangerously close to the Earth or moon."