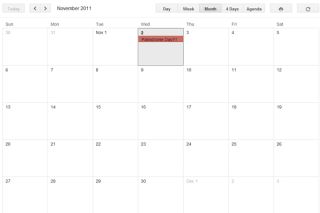 Today might not seem any more special than yesterday or the day before, but it is a once-in-10,000-years event. Nov. 2, 2011, written out numerically, is 11/02/2011, which on its own makes it a very rare eight-digit palindrome date, meaning that it can be read the same way frontward and backward.

But, as one scientist has found, there's much more to this date that makes it truly one of a kind.

"Eight-digit palindrome dates are very rare, and are clustered in the first three or so centuries at the beginning of a millennial, and then don't show up for 600 to 700 years, until they appear as a cluster in the next millennium," said Aziz Inan, a professor of electrical engineering at the University of Portland who crunches palindrome dates in his spare time.

The reason these dates are so rare is that the day number can't exceed 31. Consider, for example, a date in the year 1401. When you flip around that year, you get 1041, which is problematic because the day number, 41, exceeds the number of days in a month. That pattern carries on for the next several centuries, and is why a similar drought of eight-digit palindrome dates will set in after the year 2380. [Is Pi 'Wrong'? Mathematicians Say 'Yes']

And while eight-digit palindrome days are rare,  Inan said that no date this century, or even until the year A.D. 10,000, will be quite as special as today.

"If you look at the date as a number, 11022011, it has very special properties," Inan explained. "It is the product of 7 squared times 11 cubed times 13 squared. That is impressive because those are three consecutive prime numbers. No other palindrome date, up to A.D. 10,000, is like that.

"I thought the same way at first, but then I came to think that it should count because it's still a full date number that corresponds to a single day in the calendar system," Inan said. "People get excited when they show up, so to me, I say the more the better."