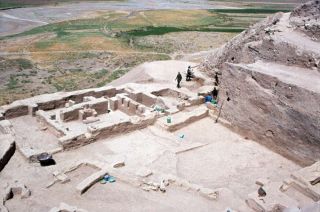 About 5,200 years ago, a mud-brick oval enclosure was built at Godin Tepe. The main building (pictured here) had two windows that may have been used for "takeout."
(Image: © Courtesy Royal Ontario Museum)

Some 5,200 years ago, in the mountains of western Iran, people may have used takeout windows to get food and weapons, newly presented research suggests.

But rather than the greasy hamburgers and fries, it appears the inhabitants of the site ordered up goat, grain and even bullets, among other items.

The find was made at Godin Tepe, an archaeological site that was excavated in the 1960s and 1970s by a team led by T. Cuyler Young Jr., a curator at the Royal Ontario Museum in Toronto, Canada, who died in 2006.

A team of researchers took up his work after he died and recently published the results of the excavation, along with more recent research on the artifacts, in the book "On the High Road: The History of Godin Tepe" (Hilary Gopnik and Mitchell Rothman, Mazda Publishers, 2011).  In addition a symposium was held recently where the takeout windows, among other research finds at Godin Tepe, were discussed.

The idea that they were used as takeout windows was first proposed by Cuyler Young and is based mainly on their height and location beside the central courtyard.

The windows could have been used by ordinary individuals or perhaps by soldiers "driving through" to grab some food, or even weapons. [See images of the ancient takeout windows]

The research shows that Godin Tepe started out, in prehistoric times, as a simple settlement. "For about 1,000 years the mound of Godin was occupied by a small village of farmers and shepherds," said Hilary Gopnik of Emory University, at a recent symposium at the Royal Ontario Museum.

That changed quickly. "Sometime in about 3,200 B.C. somebody razed those houses and built this oval enclosure," Gopnik said. The mud-brick structure had a central courtyard surrounded by buildings, including one particularly prominent structure with two windows.

"The windows and the walls of the main building are very unusual for architecture of this period, and they've been interpreted as a kind of takeout window," Gopnik said.

Inside the building, researchers discovered beveled-rimmed bowls (a pot type found throughout the Middle East), food remains, a fireplace and 1,759 sun-dried clay sling bullets, a weapon used for warfare and hunting. Clay tablets were also found within the structure.

"As far as I know, that is the only example of those odd, framing windows. We don't usually find windows at all," in the Middle East, Gopnik told LiveScience.

Clemens Reichel, a curator at the museum, said that while archaeologists do find openings that may have been air vents or cubby holes, windows are rare and are hard to identify.

"Dr. Gopnik is completely right in stating that attested windows in mud-brick architecture are rare. But it takes an experienced archaeologist to recognize an opening in a mud-brick wall — you have to be able to see the difference between mud-brick and compacted debris in such a cavity, and that can be very difficult," Reichel told LiveScience in an email.

Sling bullet with your food?

If these windows were used for takeout, what exactly was served?

A wide variety of food remains have been found at Godin Tepe. "There [were] lentils, there was goat bone, sheep bone, there was also beer and wine," Gopnik said. "We think those beveled-rimmed bowls were used for rations of grain."

As for a "drive-thru" spirits store, Gopnik said, "people have suggested that maybe they were delivering rations of beer, [but] that seems a little far-fetched."

The sling bullets, found in the building, may have been stockpiled near the end of the oval compound's life, possibly for distribution through the windows. "The compound was abandoned and partially burned in about 3,000 B.C. But whether this was purposeful or a peaceful abandonment remains a mystery," Gopnik said. [Read: History's Most Overlooked Mysteries]

While Gopnik argues that everyday Joes may have frequented this takeout joint, Virginia Badler, a doctoral student of Young's, suggests soldiers were the main patrons. As such, the oval compound may have been used to protect trade routes in the area, according to Badler, who contributed to the new book. Sitting on a high mound as it is, "you would have had quite a panoramic view," Badler told LiveScience.

Badler discussed several arguments supporting a military function for Godin Tepe, including the small, enclosed nature of the oval, which would have made it easier to protect the compound and see who was coming inside. Also, Mesopotamian rulers had problems protecting trade caravans at the time, and weapons, including a spear point, mace head and sling bullets, were found at Godin. "I have no doubt it's a fort," she said, "they wanted to funnel goods to the lowlands."

She said that when ancient military sites were abandoned in Mesopotamia, clay sling bullets were often left behind. She also suggested that the beveled-rim bowls found there may have been used for water rations rather than grain.

"There's no reason to have that beveling except that it's a wonderful place to put your lip when you drink out of it," Badler said, adding that she tried drinking out of one of these bowls. "I covered it with a very thin plastic bag, and I filled it with water," she said. "What the beveling does is it makes a very thin edge — it was extremely easy to drink out of the bowl."

A few of the bowls were also lined with bitumen, a substance used for waterproofing. "Why would you line a bowl that had grain in it, or porridge, with bitumen?"

So the compound would have served as a takeout place, though the food and bullets would have been provided to soldiers on their way to fight. "Here's your bread, here's your water, your rations for the day, and here's your (weapons), so get the marauders," Badler said.

The work was also described at a symposium held by the Canadian Society for Mesopotamian Studies. Artifacts from the site are now part of an exhibit at the Royal Ontario Museum.