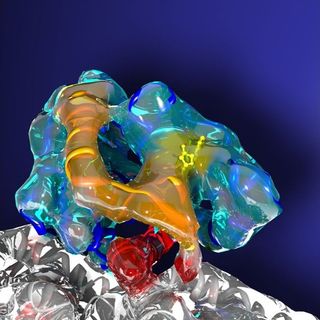 A protein called kinesin (blue in the image above) is in charge of moving cargo around inside cells and helping them divide. It's powered by biological fuel called ATP (bright yellow) as it scoots along tube-like cellular tracks called microtubules (gray).
(Image: © Charles Sindelar, Brandeis University)

The human body is home to one of the tiniest motors in the world.

A protein called kinesin (blue in the image above) is in charge of moving cargo around inside cells and helping them divide. It's powered by biological fuel called ATP (bright yellow) as it scoots along tube-like cellular tracks called microtubules (gray).

This picture captures a moment in cellular time where kinesin is stopped in its tracks. It was derived from images captured through a type of electron microscopy that uses a beam of electrons to produce an intensely magnified, high-resolution snapshot of a sample at extremely low temperatures.

Scientists know that ATP binds to kinesin, changing the protein's shape and allowing it to move. Until recently, the exact mechanism spurring kinesin to move along microtubules and start chauffeuring molecules around cells hasn't been well understood.

A team of researchers led by Ken Downing at the U.S. Department of Energy's Lawrence Berkeley National Laboratory and Charles Sindelar at Brandeis University took a new approach to the puzzle. Using the electron microscope, they combined atomic models (pictured above as colored ribbons) and transparent 3-D surface maps to get comprehensive snapshots of kinesin in action.

The team found that there's a pivot point where kinesin attaches to the microtubule tracks, allowing for a seesaw-style motion as kinesin shuffles along.

Because kinesin has the crucial role of moving chromosomes apart during cell division, blocking it can kill cells. Attacking kinesin proteins has been employed in therapies targeting cancer cells (because their cell division is out of control), but the researchers' findings could help design drugs that are even more effective and specific at blocking kinesin's movement.

This research was supported by the National Institutes of Health (NIH). To see more cool images and videos of basic biomedical research in action, visit the NIH's Biomedical Beat Cool Image Gallery.