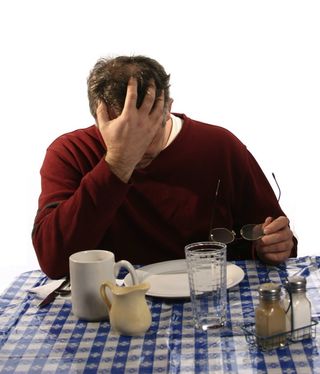 Binge-eating disorder, in which people compulsively and frequently consume large amounts of food, is as destructive for men as for women, a new study finds. Nonetheless, men are less likely than their female counterparts to seek treatment.

In part, this reluctance to get help may be because research on binge eating tends to focus on women, and eating disorders aren't seen as "male" diseases, said study researcher Ruth Striegal of Wesleyan University.

“Binge eating is closely linked to obesity and excessive weight gain as well as the onset of hypertension, diabetes and psychiatric disorders such as depression,” Striegal said in a statement. “However, most of the evidence about the impact of binge eating is based on female samples, as the majority of studies into eating disorders recruit women.”

According to the National Eating Disorders Association, between 1 percent and 5 percent of American adults have binge-eating disorder, meaning they frequently experience sessions of secretive, out-of-control eating. Women are slightly more likely than men to binge-eat, but about 40 percent of people with the disorder are male.

Nonetheless, studies of binge eating in men are sparse, with no clear understanding of how this eating disorder impacts men. In an effort to narrow this gender gap, Striegal and her colleagues analyzed both men and women who participated in health risk self-assessment screening.

Just over 21,700 men and 24,600 women participated in the screening. The researchers analyzed differences within that group for obesity, high blood pressure, high cholesterol, diabetes, depression and impairment in work productivity.

They found that out the 46,351 people questioned, 1,630 men and 2,754 women reported binge eating, which the researchers defined as experiencing at last one binge episode in the past month. Binge eating took a comparable toll on mental health in both men and women in the study. The findings, reported Wednesday (Oct. 26) in the International Journal of Eating, also indicated that binge eating harms work productivity in both men and women. Employers may need to recognize binge eating as a damaging behavior on par with stress or depression, the researchers recommended. And men should not be left behind.

“The underrepresentation of men in binge-eating research does not reflect lower levels of impairment in men versus women,” Striegel said. “Efforts are needed to raise awareness of the clinical implications of binge eating for men so they can seek appropriate screening and treatment.”