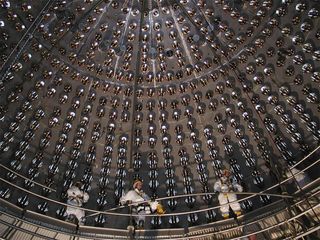 Three weeks ago, a group of Italian scientists announced that they had measured objects moving faster than light, violating the fundamental laws of physics. Since then, their work has been met by a barrage of criticism. Physicists claim to have found flaws in the group's method of recording the speed of the neutrinos, and they say that correcting for these flaws slows the neutrinos to less astonishing speeds.

The researchers who conducted the OPERA experiment (Oscillation Project with Emulsion-tracking Apparatus) stand by their work, which found neutrinos to be traveling from Switzerland to Italy at 1.000025 times the speed of light. They invited the rest of the scientific community to scrutinize their startling finding, and that is exactly what has happened  — a classic example of science in action, shouldering its way toward a consensus one way or the other on a controversial topic.

The current debate includes a series of exchanges between the OPERA scientists and Ronald van Elburg of the University of Groningen in the Netherlands.

In a paper posted to the physics pre-print website arXiv.org, van Elburg argues that the Italian scientists failed to account for the fact that the GPS satellite they used as their timekeeping device is moving. If they had corrected for the motion of the satellite as Einstein's theory of special relativity requires, they would not have measured the neutrinos traveling at a superluminal speed, van Elburg asserts.

The OPERA scientists used the clock on a GPS satellite to time the departure of neutrinos from CERN, Europe's high-energy physics lab in Geneva, and the arrival of the neutrinos at the Gran Sasso National Laboratory near Rome, about 451 miles (731 kilometers) away.

Famously, they found that neutrinos arrived at Gran Sasso approximately 60 nanoseconds before a light beam would have. [Einstein's Theory May Put Brakes on Faster-Than-Light Neutrinos]

But their timekeeping was flawed, van Elburg says, because the GPS clock was moving along its orbit from west to east above CERN and Gran Sasso, roughly parallel to the west-east line between them, and special relativity shows that this motion of the clock ever-so-slightly changes the distance between it and each of the two ground locations. When radio signals from the GPS are detected and recorded at each location to mark the neutrino departure and arrival times, the OPERA scientists needed to subtract the time it took for the signals to travel that distance. Van Elburg said they weren’t using the right measure of the distance, because they weren't considering the distance-shortening effect of the GPS clock's motion.

OPERA responded to van Elburg's accusation. "The author [van Elburg] is not really taking into account special relativity (SR), but he is trying to compose the speed of the satellite with the speed of the radio waves, which makes no sense in SR," spokesman Pasquale Migliozzi told Life's Little Mysteries. "Composing speeds" is a special way of adding them together in special relativity.

Van Elburg countered that Migliozzi has not correctly understood his argument. "I am not composing velocities but adding two distances in a single reference frame,"  Van Elburg said. A reference frame can be thought of as the point of view of a moving object — in this case, the GPS satellite.

Migliozzi also asserted, "The author does not know that relativistic effects are accounted for in the GPS system." To this, van Elburg said he is checking his facts and will follow up with additional details soon.

Stay tuned. The fate of Einstein's theory of relativity –  and indeed, most of modern physics  –  hangs in the balance.