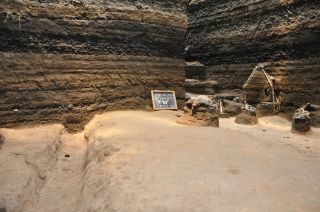 The sacbe, shown here with a drainage canal on the left and several corn plants preserved by ash on the right, is roughly 1,400 years old and is the only one ever discovered constructed without stone linings.
(Image: © Payson Sheets, University of Colorado)

At 7 p.m. local time on an evening in August some 1,400 years ago, life stopped short in the Maya village of Ceren as the Loma Caldera volcano erupted less than a third of a mile away. Now, while excavating the town, researchers have discovered a unique road, which was likely how the villagers managed to flee the billowing plume of volcanic ash as it rolled through the town.

The road is the only known sacbe made of ash; others are made with a stone-filled outer covering that holds them together. These sacbe, or "white ways," are raised paved roads built by the Maya and usually used to connect temples, plazas and groups of structures within ceremonial centers or cities; some longer roads are also known to connect cities.

"Until our discovery, these roads were only known from the Yucatan area in Mexico and all were built with stone linings, which generally preserved well," study researcher Peyson Sheets, of the University of Colorado, said in a statement. "It took the unusual preservation at Ceren to tell us the Maya also made them without stone." [Photos: First Glimpse into a Mayan Tomb]

Ceren, which is now located in El Salvador, was an ancient community of about 200 people that was buried under 17 feet (5 meters) of volcanic ash and isolated from human activities for the last 1,400 years. The area is essentially a time capsule preserved by the volcanic ash; the ash is so fine, even plants have been preserved at the site, the researchers found.

The researchers discovered the road while excavating an area 10 feet (3 m) wide near Ceren. They hit the 6-foot wide road straight on and, upon further excavation, were able to uncover a drainage ditch on one side and the remains of crops along the other side of the road. So far, they've followed the road 148 feet (45 m) along its length. [See Photos of Buried Village]

The researchers can even see repair workers' hand marks along the edges of the elevated road.

The road's direction seems to be leading from the outskirts of town to the main temple, where at the time of the eruption, the villagers had been preparing a shaman-based ritual of some sort. In an emergency, people would have used this road to escape the city, which likely happened in a rush since they left behind belongings and even half-eaten food.

"We know there was a celebration going on when the eruption hit," Sheets said. "And we've found no evidence of anyone going back to their houses, gathering up valuables, and fleeing, because all the household doors were tied shut. We think people may have left the plaza and run south, possibly on the sacbe, because the danger was to the north."

Sheets thinks they are likely to find bodies along the road — people who succumbed to the ash and smoke from the volcano. Since no bodies have been found at the site yet, most people probably had time to flee at least away from the city, even if they didn't survive, Sheets said.

"How far they might have gotten, I don't know," Sheets said. "It would have been a footrace. I think it is very likely we will find bodies as we follow the sacbe southward in future excavations."