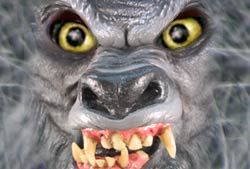 Stephanie Pistey, a Florida teenager, is accused of luring a 16-year-old boy to a remote area so her friends could kill him. The story is tragic enough, but it takes a bizarre twist: Pistey claims that she and her four co-defendants are part of a vampire cult — and that she's also a werewolf.

In an interview with local TV station WBBH-TV, Pistey said. "Since I was like 12 every fiber in my body, basically everything, I know this is going to be crazy, but I believe that I'm a vampire and part werewolf." She claims that as part of her vampire rituals she has, on at least one occasion, drank the blood of her boyfriend (and co-defendant) William Chase. What do we make of this strange claim?

Is this a legal-savvy bid to lay the groundwork for a plea of not guilty by reason of insanity? It seems unlikely, because there's no indication that the victim, Jacob Hendershot, had his blood sucked out by Pistey or anyone else; there's no clear vampirism element to the murder. Claiming you're a vampire and/or werewolf doesn't explain why you'd kill someone, nor does it mean you're not sane.

There are legions of vampire enthusiasts who draw on the works of Bram Stoker, Anne Rice, Stephenie Meyer, Stephen King and countless others for inspiration. People like Pistey are drawn to the vampire subculture for the same reasons people are drawn to any subculture: for a sense of community and shared interest, from vampire-themed book clubs to secret bloodletting rituals. Some people wear capes; others have vampire fang dental implants. Some even sip blood. [Is It Safe to Drink Blood?]

Pistey is lucky she's not living in the 16th century; while suspected witches were often attacked and burned, many suspected werewolves suffered a similar fate. In 1589, a German man named Peter Stubbe claimed to be a werewolf. He owned a belt of wolf skin that, he said, allowed him to change into a wolf: Wearing it, his body would bend into a lupine form, his teeth would multiply in his mouth, and he craved human blood.

Stubbe claimed to have killed at least a dozen people over 25 years — though his confession was made under difficult circumstances. After prolonged torture (including chunks of his flesh being ripped out with heated pinchers, and his limbs being crushed with stones) he was decapitated on Halloween 1589, and his headless body burned at the stake. There was no real evidence of his crimes other than his confession, and it seems likely that Stubbe was mentally ill and suffered from delusions. There could be an element of this with all murderers who claim to be mythical creatures.

In pop culture vampires are very alluring, with elements of power, romance, mysticism, eroticism and immortality. Given the vampires' popularity, it's not surprising that many people claim to be vampires — and some of them are also murderers.

Benjamin Radford is deputy editor of Skeptical Inquirer science magazine, author of Scientific Paranormal Investigation: How to Solve Unexplained Mysteries, and co-host of the MonsterTalk podcast. His website is www.BenjaminRadford.com.