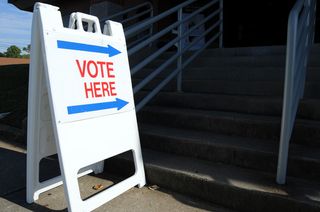 Voters expect their party's support base to be almost 20 percent larger than the party's actual turnout at the election, a new study shows.
(Image: © Frontpage | shutterstock)

Most voters not only know which candidate they prefer, they're sure they know whom non-voters prefer, a new study shows. Dutch research found that voters assume the "silent majority" — those people who do not cast a ballot — agrees with them.

Researchers at the University of Groningen in the Netherlands conducted two studies to see how voters viewed those people whose political affiliation was unknown.

"Non-voters are an ambiguous group," study researcher Namkje Koudenburg said in a statement. That ambiguity allows political parties and partisan voters to optimistically project their own beliefs onto the silent majority.

In the first study, researchers recruited 116 Dutch voters from local polling places during city council elections in 2010. After the participants voted, they were asked what party they intended to vote for in the parliamentary elections three months later. They also were asked by what percentage of votes they thought their party probably would win, as well as what percentage their party would win if non-voters were to participate.

The results showed that voters expected their party's support base to be 17 percent larger than the party's actual turnout at the election that they had just voted in.

In the second study, researchers approached 207 participants throughout three cities in the Netherlands several weeks before national elections, when political interest was presumably higher. The interviewers asked participants which of the seven major parties they intended to vote for. The questionnaires also assessed the participants' commitment to voting for that party.

The researchers then gave the participants forecasts of the distribution of votes among the seven parties and informed them that not everyone would vote. After receiving this information, the participants were asked how many votes their party might draw if everyone, including non-voters, cast a ballot.

The second study's results echoed the first, with respondents again overestimating their party's turnout at the polls. Additionally, the overestimates by the most-partisan voters tended to be even greater than those by voters who were less committed to their chosen party.

"People want to validate their opinions, to believe their opinions are right," Koudenburg said. "They are also motivated to promote their party's success."

It isn't certain whether these rosy embellishments are conscious strategies or just unconscious wishes, Koudenburg said. In addition, since the Netherlands has a different political process and government, it's not known whether these same results would hold up in the United States.

The study will appear in an upcoming issue of the journal Psychological Science.