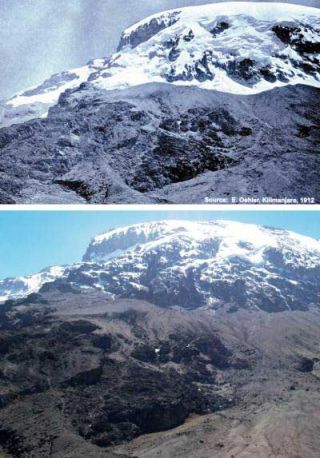 A photograph by Edward Oehler taken in 1912 (top) shows the extent of the icecap atop Mount Kilimanjaro, and a similar photo taken in 2006 by Georg Kaser illustrates the icecap's decline.
(Image: © Edward Oehler/Georg Kaser)

It's bad science to use Africa’s Mount Kilimanjaro as a poster child for global warming’s nefarious effects, two researchers say, pointing to other mechanisms causing the melt of the tropical glacier at the mountain’s summit.

Kilimanjaro’s ice has been melting away for more than a century, and most of that melt occurred before 1953, prior to the period where science begins to be conclusive about atmospheric warming in that region, according to Philip Mote of the University of Washington and Georg Kaser of the University of Innsbruck in Austria.

Also, as a tropical glacier, the processes governing ice melt on Kilimanjaro (located in Tanzania) are different than those on other mid-latitude glaciers located closer to the Earth’s poles.

These other mid-latitude glaciers become warmed and melted by surrounding air in the summer, while the air around Kilimanjaro’s 19,340-foot peak (the tallest in Africa) is generally well below freezing.

Instead, melt on Kilimanjaro is caused by sublimation, which turns ice directly into water vapor at below-freezing temperatures—essentially the glacier gets a giant case of moisture-sapping freezer burn.

In an article in the July-August edition of American Scientist, Mote and Kaser also cited decreased snowfall in the area as a driver of melt because bright, white snow reflects sunlight back into the atmosphere; if there’s not new snow, sunlight gets absorbed and melts the ice.

The scientists say that other declining glaciers, like the South Cascade Glacier in Washington,  would be a better poster child for the plight of glaciers in a warming world, which are indeed diminishing overall as a result of climate change. It's just that Kilimanjaro is one exception to the trend. Government photographs taken from 1928 to 2000 have shown that the South Cascade Glacier lost half its mass in that time.

“There are dozens, if not hundreds, of photos of mid-latitude glaciers you could show where there is absolutely no question that they are declining in response to the warming atmosphere,” Mote said.