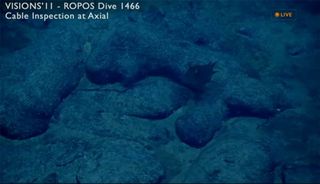 A still from the video feed: A strange critter hovers above the lava-littered seafloor near the Axial Volcano.
(Image: © Interactive Oceans/Visions '11.)

Catch some volcano action live from the seafloor today, as scientists, with the help of a deep-diving robot, explore the aftermath of a recent eruption at the Axial Seamount, an underwater volcano roughly 250 miles (400 kilometers) off the Oregon coast.

The scientists are inspecting cables that have been laid along the seafloor — part of a larger observing system designed to send real-time data on ocean conditions to scientists back on land.

Scientists recently discovered that the Axial Volcano erupted in early April, spewing forth a layer of lava more than 12 feet (4 meters) thick in some places, and opening up new vents that belch forth a cloudy stew of hot water and microbes from deep inside the Earth.

Researchers had been monitoring the volcano since 1998, when it last erupted, and suspected the mountain would erupt sometime before 2014.

The Axial Volcano rises 3,000 feet (900 m) above the seafloor, and is the most active of a string of volcanoes along the Juan de Fuca Ridge, a plate boundary where the seafloor is slowly pulling apart.