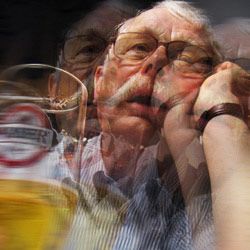 Amy Winehouse's family has reportedly said the singer may have died from alcohol withdrawal.

The family believes withdrawal may have induced fatal seizures in the singer, according to Entertainment Weekly.

But is it really possible to die from alcohol withdrawal?

Yes, experts say — though it's not common.

"Somebody who's been a drinker and consumed a lot of alcohol for a number of years probably could have severe seizures," said Dr. Robert Schwartz, chairman of family medicine at the University of Miami Miller School of Medicine.

Such seizures may cause an individual to aspirate food (inhale it through the trachea) that comes up from their stomach, possibly leading to choking and death, Schwartz said. Hitting your head during a seizure can also be lethal.

Alcohol is toxic to the body, causing changes to a person's metabolism and central nervous system, Schwartz said. But the body of an alcoholic has adapted to this new environment, Schwartz said. So abstaining from the drug completely can be dangerous.

An alcoholic who abstains from the drug will enter a state of hyperarousal, said Dr. Steven Novak, an assistant professor of psychiatry at the University of Rochester Medical Center.

"Basically, alcohol itself is a sedative," Novak said. "When you take it away, the withdrawal effects are the opposite," Novak said.

Alcohol withdrawal can also cause heart arrhythmias and kidney or liver dysfunction, which can also be fatal, Schwartz said.

If you are an alcoholic, you should seek help from a physician or alcohol addiction center, Schwartz said. Such facilities can provide psychological assistance and medications to help with withdrawal symptoms, he said.

Someone at an addiction center can also be monitored for problems during the detoxification process. "In a treatment setting, it's very, very safe to be detoxified from alcohol," Novak said. "But when someone's on their own, then it's a lot riskier," he said.

Pass it on: Although it's not common, it is possible to die from alcohol withdrawal.