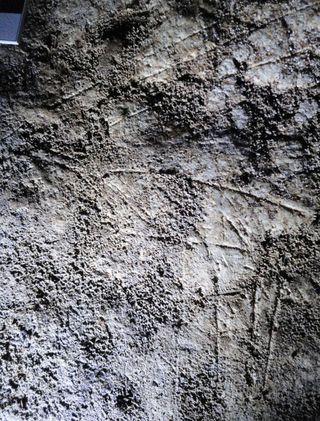 This faint engraving depicts the antlers, torso and legs of a reindeer. It was found in 2010 in a cave on the Welsh Gower Peninsula.
(Image: © Copyright George Nash)

A faint engraving of a reindeer in a South Wales cave looks to be among the oldest rock art known in Britain.

Researchers completed an analysis on July 27 that dated the image at roughly 12,600 years or older, putting it about on par with Britain's oldest known rock art.

The archeologist who discovered the engraving, George Nash, from the University of Bristol, said he believed it could be even older. [First Mammoth Image Discovered in Americas]

Nash discovered the engraving while visiting the cave with a group in September 2010. But dating — using a technique that looks at the decay of traces of radioactive uranium and thorium in the stalagmite crust deposited over the engraving — was only just completed.

The engraving's location is being kept secret to prevent vandalism, because the cave in which it is located is open to the public, said Nash, who also works with the environmental firm SLR consulting.

In 2003, the first British rock art from the Upper Paleolithic, which ended about 12,000 years ago, was discovered in Creswell Crags in England. A dating analysis put these engravings at roughly the same minimum age as Nash's more recent find. Rock art created since the end of the Upper Paleolithic is more common in Britain.

Although the engraving is difficult to make out, key elements, including its antlers, indicate it is a reindeer. Reindeer no longer live in Britain, but did during the latter part of the Upper Paleolithic, Nash said.

"The important thing is it tells us we are dealing with a society that is looking beyond hunting, fishing, gathering and appropriating from nature," he said. "There is a symbolic element to their lifestyle."

An excavation at the cave, conducted in the late 1950s, revealed flint tools, which may have been used to make such symbolic art, between 12,000 and 14,000 years old, indicating that the image could be older than the stalagmite crust that covers part of it, according to Nash.

Other experts have verified the engraving, but the results have yet to be published, Nash said. Nash is collaborating with researchers from the Open University and the National Museums Northern Island with support from the National Museum Wales and the Welsh historic environment service Cadw.