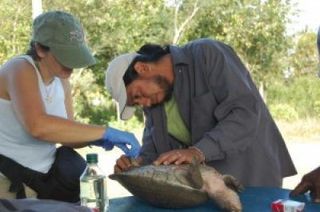 Researchers Gracia Gonzalez-Porter (left) and Rene Calderon take tissue sample from between the rear toes of a Central American river turtle from the Belize River. The genetic data showed that different river turtle populations had been in close contact for years.
(Image: © Gracia González-Porter)

Mayans who considered river turtles a delicacy brought together isolated populations of the reptiles, allowing them to interbreed, researchers have concluded.

The scientists looked at the genetic structures of 238 wild Central American river turtles (Dermatemys mawii) from three river basins in southern Mexico, Belize and Guatemala. The basins are geographically isolated by distance and high mountain chains.

There was a surprising lack of differences in lineage, scientists from the Smithsonian Conservation Biology Institute said. Although the various groups of turtles appeared to be isolated from one another, their genetic data showed that the different turtle populations had been in close contact for years.

"We were expecting to find a different genetic lineage in each drainage basin," study researcher Gracia González-Porter, of the institute's Center for Conservation and Evolutionary Genetics, said in a statement. "Instead we found the mixing of lineages. It was all over the place."

Scientists theorize that the turtles were able to interact with those from far-off locations thanks to ancient civilizations that brought them together through trading.

"For centuries, this species has been part of the diet of the Mayans and other indigenous people who lived in its historic distribution range," the researchers wrote in the study, which was recently published in the journal Conservation Genetics.

The turtles served as an important source of animal protein for the ancient Mayans of the Peten between 800 B.C. and 400 B.C., and also may have been in the diet of the Olmec culture more than 3,000 years ago, according to the researchers.

Because ancient civilizations didn't have the convenience of refrigeration, the turtles would have been kept alive in containment ponds until they were ready to be eaten or sold. During the rainy season in the tropics, the rivers and ponds would flood and overflow, freeing the captive turtles to mix with local turtles, the researchers said.

Ancient Mayans weren't the last civilization to treat the river turtle as a delicacy. Current commercial demand for the turtle's meat has pushed the resilient species to the brink of extinction. As the last surviving giant river turtle species of the family Dermatemydidae, the D. mawiiis the most endangered turtle in Central America, the researchers say.