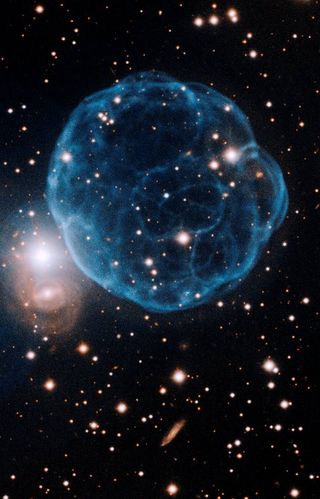 The image above depicts a recent discovery of a dying star's last gasps, an observation made by a team comprised of amateur and professional astronomers working together. Austrian amateur astronomer Matthias Kronberger and his team made the discovery of the nebula — shells of gas thrown out by some stars near the end of their lives — using the National Science Foundation-supported Gemini Observatory.

The findings of this discovery could provide significant evidence for the role that stellar companions play in the formation of planetary nebulae.

Planetary nebulae are likely the "end of life" event for stars. They form when the nuclear fusion in an old star can no longer sustain the pressure of gravity. The star becomes unstable, pulsating and throwing off a shell of gas from its outer layers. What we see as a planetary nebula, is actually this expanding shell — still glowing because of the radiation emitted by the star. Over 3,000 planetary nebulae exist throughout our galaxy.

The location of the new nebula, which is named "Kronberger 61," or "Kn 61," after its discoverer, is within a patch of sky that is monitored by NASA's Kepler planet finding mission.

The striking new nebula image was featured at an International Astronomical Union symposium on planetary nebulae the week of July 25, 2011 in Spain's Canary Islands.

For more information about the discovery, view the full press release.

Any opinions, findings, and conclusions or recommendations expressed in this material are those of the author and do not necessarily reflect the views of the National Science Foundation. See the Research in Action archive. To reach the author, contact liza-Joy Zgorski at lzgorski@nsf.gov.