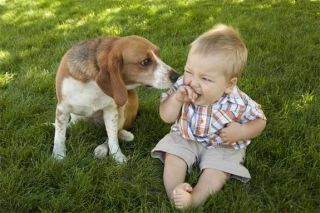 "Hypoallergenic" dogs do not have lower household allergen levels than other dogs, a new study shows.
(Image: © Mark Philbrick | BYU)

Although they've long been considered an allergy sufferer's best friend, so-called hypoallergenic dogs do not have lower household allergen levels than other dogs, according to a new study that measured allergen levels in babies' nurseries.

Dog breeds classified as "hypoallergenic" are believed to produce less dander and saliva and shed less fur. Researchers at the Henry Ford Hospital (HFH) in Detroit put this theory to the test by measuring environmental allergen levels in the houses of 173 dog owners one month after a newborn baby was brought home.

Researchers collected dust samples from the carpet or floor of each baby's bedroom and measured the levels of the dog allergen Can f 1. Only homes with one dog per family were involved in the study, and 60 dog breeds were analyzed overall, 11 of which are considered hypoallergenic dogs.

"We found no scientific basis to the claim hypoallergenic dogs have less allergen," said Christine Cole Johnson, chair of HFH's Department of Public Health Sciences and senior author of the study.

"Based on previous allergy studies conducted here at Henry Ford, exposure to a dog early in life provides protection against dog allergy development," Cole Johnson added. "But the idea that you can buy a certain breed of dog and think it will cause less allergy problems for a person already dog-allergic is not borne out by our study."

The findings will be published in the July issue of the American Journal of Rhinology and Allergy.