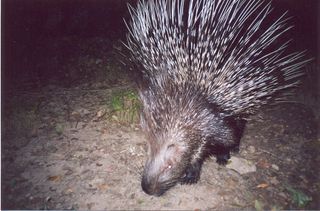 Despite years of unregulated hunting and habitat loss due to wartime conflict in Afghanistan, large mammals such as Asiatic black bears, gray wolves and leopards are managing to survive in parts of the region, according to a new survey.

Researchers from the Wildlife Conservation Society (WCS) used data gathered between 2006 and 2009 in the conflict-plagued eastern province of Nuristan, Afghanistan. The information included DNA from scat samples, animal population surveys and camera-trap surveys.

The camera traps captured a wide variety of wildlife species, including a black bear, leopard, porcupine and a yellow-throated marten, within an area covering about 424 square miles (1,100 square kilometers) in Nuristan. The survey also includes the first documented sighting of the common palm civet in Afghanistan.

Other animals documented by the survey include gray wolves and markhor goats — the largest member of the goat family, weighing up to about 240 pounds (110 kilograms), which are adapted to mountain life. [In Photos: Wildlife of Afghanistan ]

The findings indicate that wildlife continues to survive despite deforestation, habitat degradation and decades of wartime lawlessness, say the researchers. The results mirror wildlife studies in other parts of Afghanistan.

"Afghanistan's environment — like the Afghan people — has shown incredible resilience in the face of decades of instability," study leader Kara Stevens said in a statement. "However, future support is necessary to ensure that communities can sustainably manage these resources for generations to come."

The researchers note that although the remoteness of Nuristan province provides some protection for wildlife, the effects of 30 years without effective management practices to limit unregulated hunting and logging places forests and wildlife at risk. Continued loss of these resources could result in economic hardship, which may further destabilize the region.

Currently, the implementation of wildlife conservation measures in Afghanistan is limited due to security challenges. With the U.S. foreign assistance budget in danger of being cut dramatically this year, the researchers urge that U.S. Agency for International Development (USAID) funding for resource management projects, including community-based wildlife monitoring, continue in conflict regions like Afghanistan.

The first wildlife update in theeastern province of Nuristan since 1977, the study was conducted by WCS scientists and supported by USAID. The study is published in the current edition of the journal Oryx.