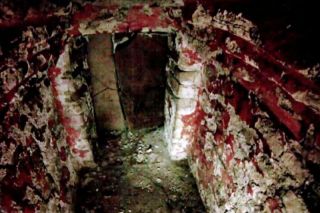 A stepped ceiling and the thick slab gateway of the burial chamber.
(Image: © National Institute of Anthropology and History (INAH))

A Mayan tomb closed to the world for 1,500 years has finally revealed some of its secrets as scientists snaked a tiny camera into a red-and-black painted burial chamber.

The tomb is located in Palenque, an expansive set of stone ruins in the Mexican state of Chiapas. According to the INAH, the tomb was discovered in 1999 under a building called Temple XX. But the stonework and location prevented exploration. [See the images taken in the tomb]

By threading a tiny video camera through a 6-inch by 6-inch (15 cm by 15 cm) hole above the tomb, researchers were able to glimpse for the first time the contents of the burial chamber. The room contains a sarcophagus and pottery dishes, which may have once held funerary offerings. The contents of the chamber suggest that the tomb is the resting place of a dignitary who ruled in Palenque sometime between A.D. 431 and A.D. 550.

Exploration of another Palenque tomb from the same time period suggests that the area was a royal necropolis, INAH archaeologists said. Later, Temple XX was built over the site, covering the vaulted chamber tomb with a step pyramid structure.