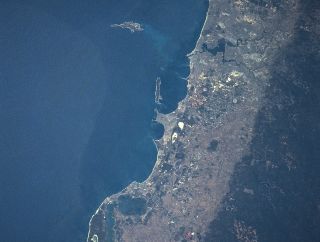 A satellite image of Perth and the surrounding coastline, the area where the river was found.
(Image: © NASA.)

An underwater "river" has been discovered snaking along the ocean bed off southwestern Australia.

The undersea phenomenon — layers of dense water that creep along the ocean floor at a rate of about a half-mile (1 km) a day — was found to be some 65 feet (20 meters) thick and stretches for more than 60 miles (100 kilometers).

Researchers say it's the first time these rivers have been glimpsed in such warm waters.

"These dense shelf water cascades are common in high-latitude regions as a result of ice formation, but this is the first time these processes have been discovered in sub-tropical regions, and to be present throughout the year," said the University of Western Australia's Chari Pattiaratchi in a statement.

Water evaporation during the region's summers, followed by cooling during the winters, fuels the formation of the rivers, Pattiaratchi said, leading to the gathering of high-density waters in the coastal shallows, which then flow offshore as slow-moving rivers.

So-called underwater rivers have been discovered in different spots around the globe.

In the Black Sea, researchers uncovered an underwater river, but one that cut deep into the seafloor, much as rivers on dry ground wind through a landscape.

The Australian underwater river was uncovered by seafaring gliders, self-propelling robots equipped with sensors to detect water temperature, salinity, plankton productivity, turbidity and dissolved oxygen. They can operate nonstop in the water for up to eight months.

The finding is published in the journal Geophysical Research Letters.