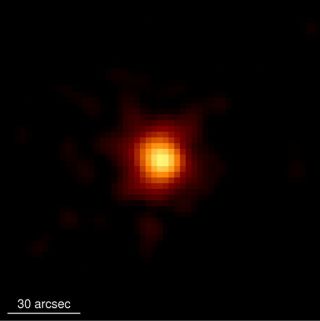 This image taken by NASA's Swift satellite shows what scientists suspect is the most distant object ever seen in space. Known as GRB 090429B, the gamma-ray burst is an exploded star and is about 13.14 billion light-years from Earth.
(Image: © ASA/Swift/Stefan Immler)

BOSTON — A short, extremely bright explosion of light recently spotted in the night sky may be the most distant object ever seen in the universe, astronomers say.

Scientists can't be sure exactly how far away the so-called gamma-ray burst was, but their best estimates place it at around 13.14 billion light-years away, making it potentially the farthest object yet detected in space. [Images of the farthest object ever seen]

The flash occurred when a star died in a supernova explosion and released a powerful jet of high-energy gamma-ray radiation. The blast shined for a mere 10 seconds but packed as much light as several thousand galaxies (more than a million million times the brightness of the sun). [Video: Brightest Flashes in the Universe?]

"By looking very far away, because the light takes so long on its journey to reach the Earth, astronomers are effectively able to look back in time to this early era," said astronomer Andrew Levan of the University of Warwick in England, one of the researchers on the team that studied the blast. "Unfortunately, the immense distances involved make this very challenging." [Top 10 Greatest Explosions Ever]

The explosion was observed by NASA’s Swift satellite in April 2009, and it was named GRB 090429B. Though the initial blast lasted only about 10 seconds, the event left a fainter afterglow that was visible in the sky for days. Researchers observed this afterglow with the Gemini North telescope on Mauna Kea in Hawaii.

However, when they tried to take a precise measurement of the spectrum of light wavelengths emanating from the burst's afterglow, which would have provided a definitive measurement of its distance, clouds rolled in over the summit of Mauna Kea.

By the next night, the afterglow was too faint to yield a useful spectrum, and over the following nights it faded from view completely.

"It was frustrating to lose sight of this burst, but the hints we had were so exciting there was no chance of us letting it go," said the study’s leader, Antonino Cucchiara, who was a graduate student at Pennsylvania State University at the time and is now at the University of California, Berkeley.

Nonetheless, the researchers were able to learn enough to estimate that the explosion is very likely farther than any other gamma-ray burst known, and probably farther than even the most distant galaxies yet seen.

"If I were in Vegas, I would never bet against the odds that this is the most distant GRB ever seen, and we estimate that there is even a 23 percent chance that it is the most distant object ever observed in the universe," Cucchiara said in a statement.

The universe, piece by piece

The finding was announced today here at the 218th meeting of the American Astronomical Society in Boston.

By studying space explosions like this, astronomers are trying to better understand how gamma-ray bursts, the most powerful explosions in the universe, occur

Astronomers also hope to piece together a better picture of the history of the universe as a whole.

"The galaxy hosting the progenitor star of GRB 090429B was truly one of the first galaxies in the universe," said co-researcher Derek Fox, an astronomer at Pennsylvania State University. "Beyond the possible cosmic distance record, GRB 090429B illustrates how gamma-ray bursts can be used to reveal the locations of massive stars in the early universe and to track the processes of early galaxy and star formation that eventually led to the galaxy-rich cosmos we see around us today."