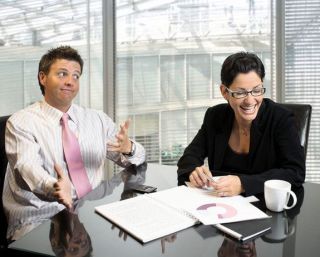 Here's a reason to be thankful for friendly co-workers: They may help you live longer, a new study says.

The results show social support from peers at work was associated with a reduced risk of death from any cause over a 20-year period.

The results held even after the researchers took into account other factors that could influence mortality, including cholesterol levels and blood pressure, alcohol consumption, smoking habits, amount of exercise per week, age, gender and education level.

The amount of social support a person receives at work could indicate how well he or she is socially integrated at their place of employment, the researchers, from Tel Aviv University in Israel, said.

Interestingly, they found no link between social support from supervisors and a reduced risk of death, suggesting relationships with the boss don't have the same effect on your health.

The study involved 820 Israeli adults who were referred to a health service center for a routine examination. Those who were referred because of a suspected mental or physical health problem, or those who were diagnosed with a chronic disease, were excluded from the study. Participants worked in a variety of industries, including finance, insurance, public utilities, health care and manufacturing. The average workday was 8.8 hours long.

At the beginning of the study, participants completed a survey that asked questions regarding their work conditions, including their amount of social support.

Social support was judged to be high if participants reported their co-workers were helpful in solving problems and they were friendly.

The subjects were followed from 1988 to 2008, during which 53 participants died.

The link between social support from co-workers and mortality was strongest for subjects between the ages of 38 to 43.

"Our findings may have some important implications for the design of worksite health promotion interventions," the researchers write in the May issue of the journal Health Psychology. "Increasing peer social support…could, in principle, lower the risks of mortality for those participating in these interventions."

More work is needed to find the mechanisms behind the link. But circumstances at work are known to affect health. For instance, a study published last month found working long hours can increase the risk of heart disease. And studies have shown those who work in demanding, poorly paid jobs often have worse mental health than those who are unemployed.

Pass it on: Your co-workers may impact your health.