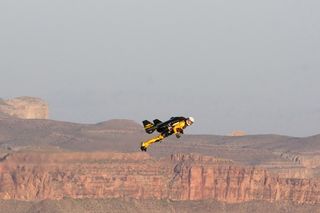 This past weekend, Yves Rossy, a 51-year-old former Swiss fighter pilot and renowned daredevil, flew over the Grand Canyon powered by a winged jet pack.

A helicopter dropped Rossy, a.k.a. "JetMan," from an altitude of 8,000 ft (2,400 m) above the world-famous canyon. Soaring at speeds of up to 190 mph, he then executed a series of barrel rolls and twists before opening his parachute and landing on the floor of the 227-mile-by-18-mile fissure. No one had ever accomplished such a feat before. [Video: JetMan flying over the Grand Canyon]

Last November the JetMan performed a similar stunt in the skies above the Swiss canyon of Vaud. In September 2008, Rossy gained international attention when he became the first winged person to make a successful crossing of the English Channel. Sunday's Grand Canyon flyover was Rossy's first U.S. flight. (He had actually planned to make the flight Friday, May 6, but it was postponed when the FAA had difficulty classifying his jet-powered wing and clearing it for flight). [10 Weird Things Humans Do Every Day, and Why]

"My first flight in the U.S. is sure to be one of the most memorable experiences in my life, not only for the sheer beauty of the Grand Canyon but the honor to fly in sacred Native American lands," Rossy stated in a press release. "Thank you Mother Nature and the Hualapai Tribe for making my lifelong dreams come true."

This article was provided by Life's Little Mysteries, a sister site to LiveScience.