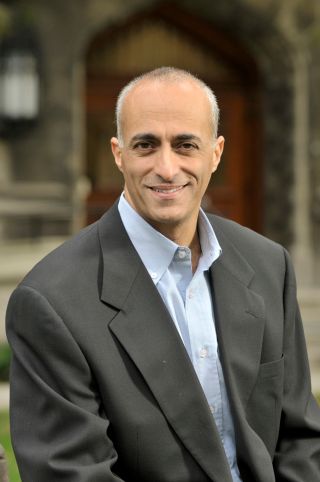 Boaz Keysar is a professor of psychology and the chair of the cognition group at the University of Chicago. He researches how people communicate, negotiate and make decisions. Many of his discoveries reveal systematic reasons for miscommunication and misunderstandings. Recently, in a National Science Foundation-supported research study, he showed that a person's accent frequently is used to identify him or her as unfamiliar or foreign. This, in turn, leads the hearer to trust the speaker less than someone without an accent. Keysar, who is a non-native English speaker, became interested in how people communicate as a very young man and, in particular, how people miscommunicate. For more information on this study or on other studies in which Keysar participated, please see his webpage at the University of Chicago website.

What inspired you to choose this field of study? I have always been fascinated by people's ability to communicate and by their overconfidence that they communicate successfully. Therefore, much of my research has been devoted to understanding how people take perspective in communication and what leads them systematically to miscommunicate. I was also motivated by my personal experience as a non-native speaker of English to investigate the impact of living in a foreign tongue. I always felt like I operate differently in English than in my native tongue, Hebrew. My recent research shows that this stems from fundamental differences in the way non-native speakers think and make decisions in a foreign tongue, and the way native speakers perceive and understand non-native speakers differently than they do native speakers.

What is the best piece of advice you ever received? The best advice I ever received was to treat differently criticism about writing and about ideas: treat other people's opinions about the clarity of your writing as a fact, but treat criticism as just an opinion when it is about ideas.

What was your first scientific experiment as a child? When I was growing up in Israel, we did not have a "science fair" in school. But I used to build gliders from balsa wood, and I spent many hours testing the performance of different wings. I've travelled a long way from aerodynamics to cognitive psychology.

What is your favorite thing about being a researcher? What I like the most is playing with new and counter-intuitive ideas with really smart students, and I have been fortunate to have several students who are smarter than me.

What are the societal benefits of your research? Over the years, my research has had several societal implications that were broad enough to attract the attention of people outside academia. For example, research from my laboratory on communication and miscommunication shows that the closer a relationship is, the more likely people are to miscommunicate. More importantly, we showed that when physicians receive patients in a hospital shift-change, they miss a substantial part of the information communicated to them. Such findings prompted attempts both at the University of Chicago and elsewhere to improve communication among doctors in hospitals, an obviously high-stake situation. My research on using a non-native tongue also has important benefits as it can be used to anticipate systematic biases in educational and business settings.

Who has had the most influence on your thinking as a researcher? My graduate adviser Sam Glucksberg encouraged me to assume that what I believe is wrong, unless there is strong evidence to suggest otherwise. He also showed me with personal example how to doubt everything and have the courage to argue against accepted dogma.

What about your field or being a researcher do you think would surprise people the most? The general public has strong beliefs about psychology that tend to be false. People think that because they have access to their own mind, they have insight into the way the mind works. Nothing could be further from the truth. Students in our classes are often very surprised to learn the counterintuitive knowledge that we have gained in the psychological sciences.

If you could only rescue one thing from your burning office or lab, what would it be? I already delivered all of my paper journals to the library, all of my electronic files are backed up, and the furniture is replaceable. I would rescue the artwork on my walls, drawn for me by my children.

What music do you play most often in your lab or car? I enjoy listening to classical music and Israeli folk songs.