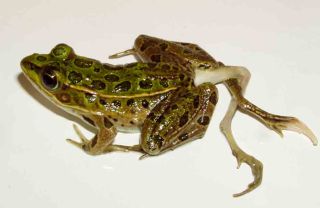 Many species of frogs and other amphibians around the world are on the brink of extinction, but the causes have remained elusive. A new report finds the reasons are much more complex than realized. The search for a single causative factor is often missing the larger picture, researchers now say, and approaches to address the crisis may fail if they don't consider the totality of causes – or could even make things worse. No one issue can explain all of the population declines that are occurring at an unprecedented rate, and much faster in amphibians than most other animals, the scientists conclude in a study announced today and published in the Annals of the New York Academy of Sciences. The amphibian declines are linked to natural forces such as competition, predation, reproduction and disease, as well as human-induced stresses such as habitat destruction, environmental contamination, invasive species and climate change, researchers said. "An enormous rate of change has occurred in the last 100 years, and amphibians are not evolving fast enough to keep up with it," said Andrew Blaustein, a professor of zoology at Oregon State University and an international leader in the study of amphibian declines. "We're now realizing that it's not just one thing, it's a whole range of things," Blaustein said. "With a permeable skin and exposure to both aquatic and terrestrial problems, amphibians face a double whammy," he said. "Because of this, mammals, fish and birds have not experienced population impacts as severely as amphibians – at least, not yet." The totality of these changes leads these researchers to believe that the Earth is now in a major extinction episode similar to five other mass extinction events in the planet's history. And amphibians are leading the field – one estimate indicates they are disappearing at more than 200 times that of the average extinction rate. Efforts to understand these events, especially in the study of amphibians, have often focused on one cause or another, such as fungal diseases, invasive species, an increase in ultraviolet radiation due to ozone depletion, pollution, global warming, and others. All of these and more play a role in the amphibian declines, but the scope of the crisis can only be understood from the perspective of many causes, often overlapping. And efforts that address only one cause risk failure or even compounding the problems, the researchers said. "Given that many stressors are acting simultaneously on amphibians, we suggest that single-factor explanations for amphibian population declines are likely the exception rather than the rule," the researchers wrote in their report. "Studies focused on single causes may miss complex interrelationships involving multiple factors and indirect effects." One example is the fungus B. dendrobatidis, which has been implicated in the collapse of many frog populations around the world. However, in some populations the fungus causes no problems for years until a lethal threshold is reached, studies have shown. And while this fungus disrupts electrolyte balance, other pathogens can have different effects such as a parasitic trematode that can cause severe limb malformations, and a nematode that can cause kidney damage. The combination and severity of these pathogens together in a single host, rather than any one individually, are all playing a role in dwindling frog populations.

Amphibians have been around for about 400 million years, persisting through ice ages, asteroid impacts, and myriad other ecological and climatic changes. Their rapid disappearance now suggests that the variety and rate of change exceeds anything they have faced before, the researchers said. "Modern selection pressures, especially those associated with human activity, may be too severe and may have arisen too rapidly for amphibians to evolve adaptations to overcome them," the researchers concluded. This work was supported by the National Science Foundation and the David and Lucile Packard Foundation.