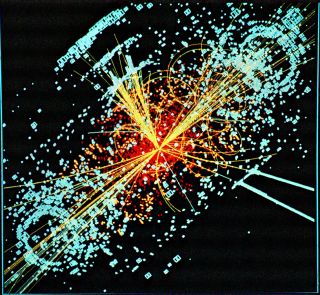 This track is an example of simulated data modelled for the CMS detector on the Large Hadron Collider (LHC) at CERN. Here a Higgs boson is produced and then decays into two jets of hadrons and two electrons. The lines represent the possible paths of particles produced by the proton-proton collision in the detector while the energy these particles deposit is shown in blue.
(Image: © CERN)

A rumor is floating around the physics community that the world's largest atom smasher may have detected a long-sought subatomic particle called the Higgs boson, also known as the "God particle."

The controversial rumor is based on what appears to be a leaked internal note from physicists at the Large Hadron Collider (LHC), a 17-mile-long particle accelerator near Geneva, Switzerland. It's not entirely clear at this point if the memo is authentic, or what the data it refers to might mean — but the note already has researchers talking.

The buzz started when an anonymous commenter recently posted an abstract of the note on Columbia University mathematician Peter Woit's blog, Not Even Wrong.

Some physicists say the note may be a hoax, while others believe the "detection" is likely a statistical anomaly that will disappear upon further study. But the find would be a huge particle-physics breakthrough, if it holds up.

"If it were to be real, it would be really exciting," said physicist Sheldon Stone of Syracuse University.

Hunting for the Higgs

The Higgs boson is predicted to exist by prevailing particle-physics theory, which is known as the Standard Model. Physicists think the Higgs bestows mass on all the other particles — but they have yet to confirm its existence.

Huge atom smashers — like the LHC and the Tevatron, at Fermilab in Illinois — are searching for the Higgs and other subatomic bits of matter. These accelerators slam particles together at enormous speeds, generating a shower of other particles that could include the Higgs or other elemental pieces predicted by theory but yet to be detected. [Wacky Physics: The Coolest Little Particles in Nature]

The leaked note suggests that the LHC's ATLAS particle-detection experiment may have picked up a signature of the elusive Higgs. The signal is consistent, in mass and other characteristics, with what the Higgs is expected to produce, according to the note.

However, some other aspects of the signal don't match predictions.

"Its production rate is much higher than that expected for the Higgs boson in the Standard Model," Stone told SPACE.com in an email interview. So the signal may be evidence of some other particle, Stone added, "which in some sense would be even more interesting, or it could be the result of new physics beyond the Standard Model."

Too soon to tell

Stone was quick to point out that the note is not an official result of the ATLAS research team. Therefore, speculating about its validity or implications is decidedly preliminary.

"It is actually quite illegitimate and unscientific to talk publicly about internal collaboration material before it is approved," Stone said. "So this 'result' is not a result until the collaboration officially releases it."

Other researchers joined Stone in urging patience and caution before getting too excited about the possible discovery.

While it's still early, some researchers have already begun to cast doubt on the possible detection. For example, Tommaso Dorigo — a particle physicist at Fermilab and CERN, which operates the LHC — thinks the signal is false and will fade upon closer inspection.

Dorigo — who said he doesn't have access to the full ATLAS memo — gives several reasons for this viewpoint. He points out, for example, that scientists at Fermilab didn't see the putative Higgs signal in their Tevatron data, which covered similar ground as the ATLAS experiment.

Dorigo feels strongly enough, in fact, to put his money where his mouth is.

"I bet $1,000 with whomever has a name and a reputation in particle physics (this is a necessary specification, because I need to be sure that the person taking the bet will honor it) that the signal is not due to Higgs boson decays," he wrote on his blog today. "I am willing to bet that this is NO NEW PARTICLE. Clear enough?"