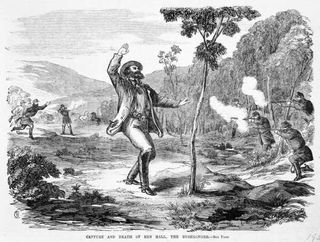 Breathing life into past heroes and criminals, a new website out of Australia is serving up digital obituaries with an online trail that can read more like a murder mystery.

For instance, the newly launched website Obituaries Australia reveals the obituary of bushranger Ben Hall with links to the people he robbed — along with gang members, police officers who pursued him, the man Hall's gang fatally shot and his son, who had witnessed the shooting. [Fight, Fight, Fight: The History of Human Aggression]

"We are interested in mapping all sorts of relationships and revealing the web that people's lives spin around others," said Melanie Nolan, director of the Australian National University's National Center of Biography, which hosts the website. Their goal is to capture every published Australian obituary.

The site is based on more than 300,000 individual citations on index cards housed in 180 catalog-card drawers. The project will help identify subjects for ANU's Australian Dictionary of Biography and could also spur research projects on Australians' history, Nolan said.

As an example, Nolan describes what happens when a user clicks on "World War I" in the database. "You will find the names of all those, in the database, who played some part in the war — as soldiers, Red Cross administrators, in the conscription debate, as well as those who gave up their stately homes for military hospitals," she said in a statement. "You will also find a list of those who were engaged in the major military battles and the roles they played, those who were killed in action or who died later of war wounds."

The featured obituary today (April 19) opens the window on Elizabeth Field Lucas (then Ratten), one of Australia's highest-ranking female officers during World War II who died at age 94 in 2007. The obit goes on to describe her business sense, which was first seen in her graphic design company. "It was in 1938, with graphic design becoming an important element in marketing, that the then Elizabeth Ratten established Creative Displays in Park Street, South Melbourne. It was a highly successful venture that employed more than 20 staff, including creative artists and tradesmen, who had to adjust to the idea of the boss being a female, and a young one at that," it reads.

Then there's the note about the death of Johnny Vane, the last of the notorious Ben Hall gang of bushrangers, described in the obituary as "the most humane of the gang."