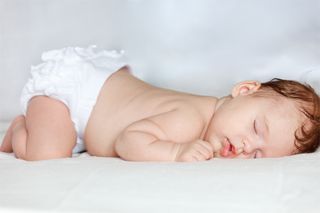 The number of infants with a specific type of head deformity, in which the skull flattens out from repeated pressure to the same area, has increased exponentially over the past 20 years.

While the condition, known as deformational plagiocephaly, is now common, there is no standard treatment for it, and some argue none is needed, saying the condition will get better on its own. Most experts recommend placing helmets on the heads of babies with severe DP cases.

Scientists note that the surge in cases coincides with a campaign by pediatricians to prevent sudden infant death syndrome by making sure babies didn't sleep on their stomachs. The Back to Sleep campaign, launched in 1992, initially urged parents to lay babies down on their side or back; the recommendation was later changed to back only.

"[The back to sleep campaign] has been very effective in reducing SIDS death, but it had the unanticipated outcome of creating molding of the skull, which was not seen as frequently before the recommendations were made," said Dr. John Persing, a professor of plastic surgery at Yale School of Medicine.

The risk of deformity comes from lying for long periods with one spot of the head pressed against the mattress.

Deformational plagiocephaly is far from the only disease that lacks a standard of care, and in such situations, doctors "wind up making decisions based on opinion," said Dr. Stephen Warren, a craniofacial surgeon at New York University Medical Center. "And sometimes in medicine you have to do that, but anytime you make a decision based on opinions you'll have conflicting opinions."

Additional studies "are the best way to make the best choices for the children we treat," said Warren, who published an article in the January issue of the Journal of Craniofacial Surgery, one of several in that issue to explore the topic. Warren's article discussed diagnosis and current treatments.

DP is diagnosed in some 400,000 to 800,000 children in the United States each year. Experts stress the incidence rate could be drastically reduced if parents followed a few simple steps, such as alternating the baby's sleeping position from one night to the next.

Deformational plagiocephaly occurs when an infant keeps his or her head in the same position for a long period of time while lying down. Some infants are more prone than others to developing DP — for instance, infants who are born with torticollis or who develop it. These babies have a twisted neck that causes their head to tip to one side while the chin is turned to the other.

Nobody's head is perfectly spherical; we all have a little asymmetry to our skulls. When a child is suspected of having DP, the question is: How bad is the problem? There is currently no grading system to judge how severe a child's head deformity is, Warren said. Most doctors probably assess the patient visually and, based on their own experience, judge whether intervention is warranted.

To take away some of the subjectivity, Warren said, physicians should measure children's heads and note how the deformity changes over time. Then they can get a better idea of which cases will clear up on their own and which will require treatment.

"In order to objectify decision-making, you'd want to probably measure the severity of the problem," Warren said.

Most physicians agree that some babies with DP require helmets. But before the baby is about 3 to 6 months old, physicians and parents should first attempt to correct the problem with physical therapy. This involves exercises to accustom the baby to turning his or her head in different directions.

"Not every child who comes in with a flat head needs a helmet," said Dr. Lisa David, a professor of plastic and reconstructive surgery at Wake Forest University Baptist Medical Center in Winston-Salem, N.C.

But if, after the exercises, the condition has not improved, a helmet will prevent the baby from lying on the flattened spot and will create a space for the baby's head to grow.

Early in life, a baby's head is like putty, but as he or she approaches 1 year old, the bones become more brittle. So after about a year, helmets are not as effective, said Persing,of the Yale School of Medicine.

Some physicians think DP can get better without any intervention. Persing said he was once among that group.

"I've seen enough children now [to know] that it doesn't remodel on its own, it needs some help in some cases," Persing said.

But to have conclusive evidence that helmets work, scientists need to run what is called a randomized controlled clinical trial. This trial would randomly assign some infants to wear helmets while others have no treatment, to see what the outcomes are. Ideally, physicians would use this type of evidence to help them make the best decisions for their patients, Warren said.

Such a study has never been conducted, and some think it never will be, because it would require that some infants not be treated.

Right now, the head deformity is corrected to avoid social problems for the child later in life. If DP were found to cause neurological problems as well, that would be an entirely new reason to treat these children, Warren said.

Persing said he is currently conducting a study to examine in detail whether DP leads to neurological impairments.

Experts say DP can be avoided with two simple activities. Parents should still lay infants down on their backs, but when the babies are sleeping, parents should alternate which side of the head the baby will rest on for the night. For instance, if a baby falls asleep with his or her head facing to the right one night, parents should turn the head to the left the next night.

In addition, under strict supervision, babies can be placed on their stomachs every now and again. This avoids putting pressure on the skull and strengthens the baby's neck muscles, Persing said.

"Just with those two simple maneuvers, you will probably avoid deformational plagiocephaly," and the condition would once again be rare, as was in the days before the SIDS recommendations, Persing said.

Pass it on:The number of cases of deformational plagiocephaly has increased dramatically in recent years. Researchers differ in how they think it should best be treated, though most think helmets are warranted in some cases.