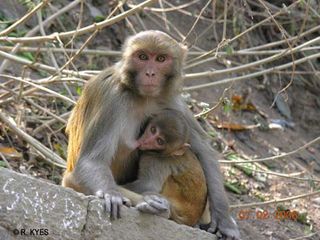 The so-called "love and trust" hormone called oxytocin, originally discovered in the monogamous prairie vole, has been found in an odd form in a monkey species.

"This is the first time oxytocin has been reported to be different in any mammal ever studied," said researcher Karen Parker at Stanford University."The orthodoxy in the field was that all mammals have one form of oxytocin."

Oxytocin is a brain hormone that regulates parts of mammalian reproduction, including lactation and labor, but also is involved in social behaviors such as bonding between partners and mother-and-child, hence its unofficial  "love” hormone moniker.

It is released by a part of the brain called the pituitary gland and travels throughout your system. It was widely thought to be exactly the same in all mammals, since it plays such an important part in reproduction and social bonding.

When studying her lab monkeys, Parker was having trouble measuring their oxytocin levels. "We had been trying for years to measure oxytocin levels in our monkeys," she told LiveScience. "On a lark, we sequenced the gene."

One of the amino acids, the molecules that make up proteins, is different. This amino acid is bigger, which might change the protein's structure or action, though the monkeys display normal social behaviors and have similar reactions to the traditional type of oxytocin as other mammals.

"It plays such a critical role in social functioning," Parker said. "It's such a small peptide; any sort of mutation might undermine those critical functions. There is a strongly selected pressure to keep this molecule."

Parker and her team will continue investigating the activity of this new form of oxytocin to determine what kinds of effects it has compared with the original form.

It's important to elucidate these differences in these animals, especially since they include common laboratory species, said Karen Bales, a researcher at UC Davis who wasn't involved in the study. "Dr. Parker's findings are very exciting," she told LiveScience in an e-mail. "They should provide the impetus for future research, including the biological and chemical properties of the structurally different oxytocin."

The study was published today (March 15) in the journal Biology Letters.