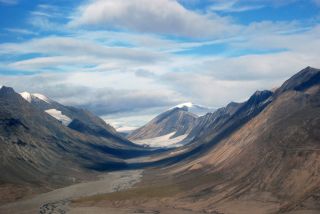 When in Quttinirpaaq National Park in the Canadian Arctic, Ohio State University Earth scientist Joel Barker initially spotted some pieces of dead trees scattered on the barren ground near a glacier. Immediately, he knew he had found something akin to a looking glass peering into the Arctic’s ecological past.

The Hazen Plateau on Ellesmere Island, a polar desert where winter temperatures can currently dip down to 50 below zero, is currently too cold and dry to support forests; the only living trees that now dot the park’s desolate landscape are dwarf willows. Therefore, the pieces of wood must have come from trees that lived millions of years ago, when the Arctic was still warm enough to support forests.

The trees probably died in a landslide, as indicated by deposits still present on surrounding material. The killing landslide toppled and engulfed the trees quickly enough to seal them from oxygen and to prevent water from circulating through. The result: The remaining pieces of dead trees are now in a perfectly preserved mummified state, with much of their organic material still intact. (By contrast, if the trees had been petrified, much of their organic material would have been slowly replaced by minerals and eventually turned to stone.)

In fact, the organic material in the dead trees is so well preserved that the wood can still burn, and even the most delicate tree structures, such as leaves, are present. "The dead trees look just like the dried-out dead wood lying outside now," said Barker.

The summer following his discovery, Barker returned with colleagues, supported by an EAGER grant from the National Science Foundation. Barker and Ohio State colleagues Yo Chin and David Elliot explored and collected samples from the source of the scattered tree pieces—a deposit about 100 feet (30 meters) wide by 30 feet (10 meters) high.

Analyses of the organic material can reveal much about the source trees and about the ecological conditions that existed when they lived. For example, because pollen that disappeared about 12 million years ago are absent from the wood, Barker believes that the trees are probably at most 12 million years old. And because ocean cores that contain land-derived sediment indicate that forests disappeared from the Arctic about 2 million years ago, Barker believes that the wood is probably at least about that old.

Other evidence indicates to Barker that his wood samples came from trees that were once part of an ecologically stressed ecosystem. For example, the tree pieces have narrow growth rings, indicating that, when alive, the trees lacked sufficient nutrients for growth.

In addition, Barker said that only five different species of trees were represented in the ancient wood he collected. Such relatively low species diversity is typical of stressed ecosystems. That is because as an ecosystem becomes more stressed and less habitable, fewer species can survive in it. "Probably living at the most northern extent of its range, this forest was probably living at the edge, just hanging on, just barely staying alive," said Barker.

Barker believes that additional stress was probably imposed on the already-stressed forest by abrupt atmospheric cooling. The cooling probably resulted from changes in oceanic circulation that—in turn—resulted from the movements of the Earth’s continents.

In the meantime, Barker will continue to analyze his mummified samples. He plans to extract individual components from pieces of mummified tree trunks to identify environmental conditions that the trees experienced on an annual basis throughout their lives. In addition, he plans to compare specific tree components, such as leaf cuticles, from mummified material with the same components from contemporary trees of the same species. Differences between the mummified and contemporary components of the same tree species may provide clues about the evolution of those species.

But with such experiments, Barker will only be literally scratching the surface of his mummified samples. He hopes to soon return to their site of origin to dig deeper to find their source forest, where trees may be standing upright in a so-called "growth position."

Editor's Note:This research was supported by the National Science Foundation (NSF), the federal agency charged with funding basic research and education across all fields of science and engineering. Any opinions, findings, and conclusions or recommendations expressed in this material are those of the author and do not necessarily reflect the views of the National Science Foundation. See the Behind the Scenes Archive.