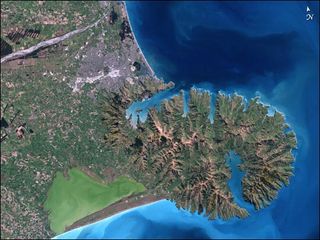 A week after an earthquake killed at least 160 people in New Zealand, the country is experiencing a surge of new life. In Canterbury, the region affected by the quake, hospital maternity wards are filled to capacity, and they have even had to transfer some newborns to other hospitals.

Studies have shown an uptick in stress during pregnancy can sometimes trigger a hormone surge that induces early labor.

Birth rates will spike not just immediately after natural disasters. They pick up around nine months afterward, too.

An 8.8-magnitude earthquake that struck central Chile Feb. 27, 2010, for example, was followed nine months later by a baby boom. "We have found a marked increase in obstetric consultations in the areas most damaged by the earthquake," Chilean Health Minister Jaime Mañalich said in November.

The same thing happened nine months after Haiti's devastating quake of Jan. 12, 2010. According to a reproductive health survey launched in October by the United Nations Population Fund, the fertility rate has tripled in urban areas in the country since the disaster.

Population Fund representative Igor Bosc said a lack of infrastructure is responsible. "Most of the hospitals able to provide services were destroyed in the most densely populated parts of the country," Bosc told the local media in November. That meant that women did not have access to their preferred contraceptives.

As well as possessing fewer condoms, disaster survivors may have been engaging in more sex.

Sex is a way of coping with stress, explained one Haitian journalist. "In those fragile situations, people are slowly trying to rebuild their lives," Fredrick Jean Pierre said. "There are women who give themselves to a man to benefit from his protection inside the camp. Others sell themselves so they can get food and water. Sometimes it is their only means of access. This is happening quite often."

Nothing else to do

Nine months after New York City experienced a 10-hour blackout in November 1965, births seemed to surge. "The lights went out and people were left to interact with each other," Paul Siegel, a sociologist, told the New York Times in 1966. Some skeptics, however, dismissed the increase as a meaningless fluctuation.

The media has reported birth spikes all up and down the East Coast the past couple of autumns, attributed to the previous winters' "snowpocalypses."