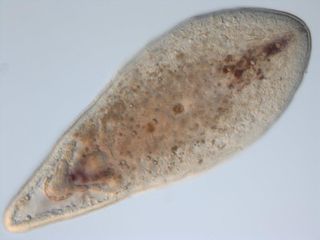 They feed and poop from the same hole and look about as simple as they come, but two large groups of marine worms are more closely related to us than are insects and mollusks, a new study shows.

The "lowly" worms belong to two large groups called Xenoturbella and Acoelomorphaand are no strangers to uncertainty, as zoologists have long debated how to classify the organisms. The acoelomorphs, for instance, were reclassified in the 1990s as an early branch of evolution and have been considered at the base of the family tree for bilateral organisms (those with a right and left side, which make up most of Earth's animals).

"We can no longer consider the acoelomorphs as an intermediate between simple groups such as jellyfish and the rest of the animals," said researcher Max Telford of the Department of Genetics, Evolution and Environment, University College London. "This means that we have no living representative of this stage of evolution: the missing link has gone missing."

Telford and his colleagues compared hundreds of genes from both Xenoturbella and Acoelomorpha with a whole range of animal species to determine their evolutionary relationships.

Neither worm group showed evidence of being from such an early branch of evolution. Rather, the genes suggested both groups descended from the same ancestor that gave rise to the complex groups of animals (called the deuterostomes) that includes vertebrates, like humans, and starfish.

When analyzing past data sets of genetic information on the worms, the team got rid of an artifact that can bias results called long branch attraction, which results when the genes of some species evolve much more quickly than others, making them look much different from the others, when in fact they're not.

They also had new sources of data, including micro RNA, which are small sections of the RNA molecule that can silence genes they are associated with. These micro RNAs appear in organisms gradually through evolution. Two micro RNAs found in both Xenoturbella and Acoelomorpha seem to be unique to the deuterostomes, suggesting the two worm groups do indeed belong to this group of complex creatures.

With the new study results, the researchers say the two worm groups constitute an entirely new division of life, or phylum, which they name the xenacoelomorpha. This phylum would join the three known phyla of deuterostomes: vertebrates (animals with a backbone, including humans); echinoderms (such as starfish), and hemichordates (such as acorn worms).

Being such simple creatures and yet still mixing and mingling on the family tree with us complex creatures suggests these marine worms were once complex themselves, Telford said.

"This is an interesting evolutionary question," Telford told LiveScience." Why do animals lose complex features, and how do they do it? What genes have they lost?"

They "why" questions will be tricky to answer, but Telford and his colleagues have already gotten started in figuring out the "how," he said.

The study is published in the Feb. 10 issue of the journal Nature.