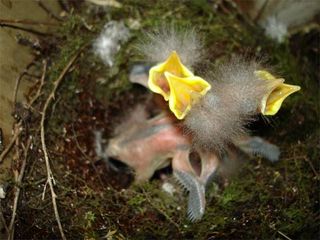 Eight-day-old hihi chicks beg for food. When mama bird has more romantic opportunities, she skips out on the birds.
(Image: © Rose Thorogood.)

The pleas of needy chicks take their toll on a mama bird, but research now shows that a mother bird will break away from parenting when more enticing opportunities arise, such as the chance to mate again.

Hihi birds (Notiomystis cincta) that live in the forests of Tiritiri Matangi Island in New Zealand ignore the intensity of their nestlings' begging displays when they have the chance to reproduce multiple times in a season, according to a study published Jan. 25 in the journal the Proceedings of the Royal Society B: Biological Sciences.

Putting a lot of effort into feeding the bird brood increases the likelihood that the progeny will survive and procreate. But healthy parents may instead focus their energy on mating again as soon as possible, because they could be rewarded with more offspring.

To test whether avian parents trade off nurturing their brood for future opportunities to breed, a research team led by behavioral ecologist Rose Thorogood of the University of Cambridge studied a population of Hihi birds. “The sensitivity of parents to offspring's signals in relation to their future reproductive attempts hasn’t really ever been explored before,” Thorogood said.

For nine days, the researchers fed some of the nestlings sugar water laced with carotenoids (pigmented molecules that turn their mouths a deeper shade of yellow and thus enhance their open-mouthed begging displays). The next day, the team used miniature infrared cameras to record for three hours the frequency with which adults visited the nests and regurgitated food for their young.

Birds that laid only one clutch within a season were more responsive to chicks with bright yellow mouths —feeding them and visiting their nests more often — than to chicks that had not consumed carotenoids. By contrast, adults that later laid a second clutch were not sensitive to the intensity of nestlings’ begging displays, giving equal attention to all chicks.

The study demonstrates that parents weigh the costs and benefits of attending to their broods' demands and attempting to breed again, Thorogood told LiveScience.

“Parents aren’t just slaves to the offspring; they have some control over the situation,” she said. “If the parents know they’ve got a good chance of breeding again in the future, they can’t be completely manipulated by the offspring.”

The results may also explain the overlooked research topic of why individual parents of different species vary so much in their responses to begging, Thorogood added.

John Ewen, a co-author and behavioral ecologist from the Zoological Society of London, said "Our results may help explain some of the apparently conflicting results of previous studies by offering a reason for variable sensitivity of parent birds to the demands of their young."