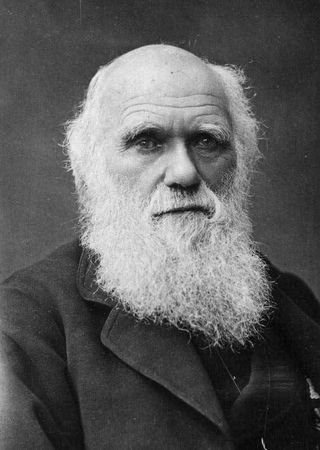 This is one of the last photographs taken of Charles Darwin, circa 1878. From his observations on the Galapagos Islands, Darwin developed the theory of evolution whereby changes in species are driven, over time, by natural and sexual selection. He struggled internally with this idea, finally publishing The Origin of Species 20 years after returning from his voyage.
(Image: © Richard Milner Archive)

The majority of high-school biology teachers don't take a solid stance on evolution with their students, mostly to avoid conflicts, and fewer than 30 percent of teachers take an adamant pro-evolutionary stance on the topic, a new study finds. Also, 13 percent of these teachers advocate creationism in their classrooms.

"The survey left space for [the teachers] to share their experiences. That's where we picked up a lot of a sense about how they play to the test and tell students they can figure it out for themselves," Michael Berkman, co-author of the study with Penn State University colleague Eric Plutzer, told Livescience. "Our general sense is they lack the knowledge and confidence to go in there and teach evolution, which makes them risk-averse."

Creationists broadly believe God created Earth, its inhabitants, and the universe, with Christian creationists taking a literal interpretation of the Book of Genesis in the Bible. However, scientific evidence says evolutionary theory, the idea that all organisms evolved from some common ancestor, by means of natural selection, explain the planet's diversity of life. Some of the earliest life on Earth dates back to 3.7 billion years ago.

"The implications for us are very concerning, that there are teachers who are not teaching science, who are not teaching some of the core tenents of science," Francis Eberle, who was not involved in the study and serves as the executive director of the National Science Teachers Association, told LiveScience.

All major federal court cases in the United States over the past 40 years, in which local citizens or others have tried to get creationism (or its more recent rubric Intelligent Design) into the science classrooms, have failed, the researchers pointed out.

The data was collected from 926 nationally representative participants in the National Survey of High School Biology Teachers, which polled them on what they taught in the classroom and how much time they spent on each subject. They also noted the teachers' personal feelings on creationism and evolution.

Only 28 percent of high-school biology teachers followed the National Research Council and National Academy of Sciences recommendations on teaching evolution, which include citing evidence that evolution occurred and teaching evolution thematically, as a link between various biology topics.

"We say [evolution is] a central idea in biology, but someone can get a biology degree and not take a class in it," Randy Moore, a science and evolution education specialist in the biology department at the University of Minnesota who was not involved in the study, told LiveScience. "We let that go in the name of religious freedom."

In comparison, 13 percent of the teachers said they "explicitly advocate creationism or intelligent design by spending at least one hour of class time presenting it in a positive light." These are mostly the same group of teachers (about 14 percent) who personally reject the idea of evolution and the scientific method, and believe that God created humans on Earth in their present form less than 10,000 years ago. (That 14 percent included teachers' personal beliefs, regardless of whether they taught these in the classroom.)

Some of the creationism advocates insisted that they, rather than scientists, were practicing proper science, with a Minnesota teacher commenting, "I don't teach the theory of evolution in my life science classes, nor do I teach the Big Bang Theory in my [E]arth [S]cience classes.... We do not have time to do something that is at best poor science."

Others rejected the scientific method as valid for shedding light on the origin of species, with an Illinois teacher responding, "I am always amazed at how evolution and creationism are treated as if they are right or wrong. They are both belief systems that can never be truly or fully proved or discredited."

Eberle believes that it might be the teacher's own scientific education that leads to these problems. "We haven't done a good enough job with making people understand what is science and what isn't," he said. "Science doesn't deal with the human condition, like why we were here. That's fine to be covering those, but not in the science classroom."

No stance on evolution

About 60 percent of the teachers polled didn't take a direct stance on the subject, dubbed by the authors as the "cautious 60 percent."

Based on respondents' write-in answers, the researchers surmised that many of these cautious teachers toed the line, weakly teaching evolution without explicitly endorsing or denying creationism in order to avoid controversy and questions from both students and parents.

Often, a letter in support of evolution from the principal or the school board is enough to instill confidence in the teachers, Steven Newton, Programs and Policy Director at the National Center for Science Education who was not involved in the study, told LiveScience. "It would be beneficial for there to be more support from the administration, so [teachers] don't feel out there all alone," he said.

The researchers found that many of these teachers didn't have an educational background that instilled confidence in teaching evolution as a scientific fact. "You can take very little science and get a degree and be teaching in high school. The quality of what [students learn] is so dependent on the teacher you get," Newton said. "It's almost a random experience; it's kind of the luck of the draw."

The study's authors suggest that states should require all education majors to take a stand-alone evolution course at the university level before they can become science teachers, while school systems should offer follow-up refresher courses for those already teaching. Extra evolution courses would encourage teachers to embrace evolutionary biology, and make it easier to teach confidently, Berkman said.

Others don't agree that's the answer. "If someone wants to learn about evolution, it's not hard to. It's hardly a science education problem," Moore said. "Scientists think if teachers just take a class they will accept it, but many simply reject it."

A strict evolution class may not be possible at many educational institutions, and wouldn't necessarily enforce the importance of teaching science as an evidence-based subject. "Many schools that focus on educating teachers aren't research universities and may not have the resources to offer a course on evolution," Newton said. "The practical reality is we may just need to teach introductory biology in a way that emphasizes the importance of evolution, and that might accomplish the same goal."

Berkman and Plutzer present a thorough discussion of their research into how evolution is taught in their book, "Evolution, Creationism, and the Battle to Control America's Classrooms" (Cambridge University Press, 2010).

The study is published today (Jan. 27) in the journal Science.