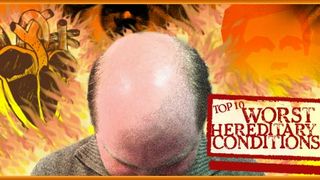 Children of alcoholics are not destined to be alcoholics too. But recent research reports about 50 percent of the risk for alcoholism is genetically determined. The environment accounts for the other risky half. The disease is considered genetically complex, meaning that several genes come into play and they can affect individuals differently.

The cause of most breast cancers is still a mystery, however researches have discovered that mutations in particular genes, such as BRCA1 and BRCA2, cause some cancers. Women who inherit the mutation tend to get cancer early in life and in both breasts. Men with BRCA1 have an increased risk of prostate cancer, while BRCA2 increases the likelihood of cancers in the male breast, prostate, pancreas, and elsewhere.

Ten million men in the U.S. cannot distinguish red from green. Yet the disorder only affects less than 600,000 American women. Why? The genes for red and green receptors sit near each other on the X-chromosome. Men only have one X-chromosome, which they inherit from their mother. Meanwhile, women have two, and a normal gene can often balance out a defective one.

Next time you're in the principal's office with a pink slip for roughhousing on the playground, point the finger at your family. A gene that increases an individual's risk for violence has been discovered. Researchers have also found aggressive behaviors in boys are more likely to be inherited than non-aggressive antisocial behaviors like stealing someone's lunchbox. But genes play a bigger role in female thieves.

Super size fries and a heavy set of genes is a recipe for obesity. One scientific theory suggests the same genes that helped our ancestors survive famines are now working against people living in places where food is plentiful. Genes have been shown to be the cause of obesity disorders such as Bardet-Biedl syndrome and Prader-Willi syndrome. Many of today's bulging waistlines have only to do with eating too much of the wrong foods, however.

A family history of heart disease, diabetes, stroke or high blood pressure isn't good for your heart. Children of parents with heart and blood vessel diseases are more likely to develop them too. Plus, a person with a congenital heart defect is slightly more likely to have a baby with a heart defect.

Although identical twins are random events, fraternal twins pop up in families again and again. A mother doing double diaper duty carries a gene that makes her release multiple eggs during ovulation, called hyperovulation. Although a man who carries the gene will probably not father twins, passing the family trait to his daughter could make him a grandfather of twins. This is why twins sometimes appear to skip generations, even though there's no evidence that twins are more likely to occur every other generation.

Go ahead and fault your parents for your pimples. Studies have shown that many school-age boys with acne have a family history of the skin condition. As well, having parents who endured a bad case of zits makes one more likely to suffer from severe acne too.

The Chinese distaste for milk was thought to be a cultural one, until scientists in the 1960s discovered lactose intolerance in Asians, Africans, and southern Europeans. Within the past 10,000 years, a genetic change allowed the ability to digest milk to evolve, but only where dairy farming was the norm. If you can't tolerate milk, your relatives probably left cow udders alone.

Although baldness is common in men, scientists don't understand much about why so little is going on up there. Genes do play a role, but your mom is not the only one at fault. Baldness is likely due to abnormalities in several genes from one or both parents. People with a rare type of permanent baldness called alopecia universalis, lose hair all over their bodies and carry defective 'hairless' genes.