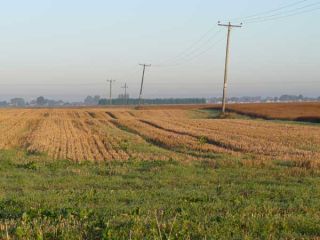 The fossilized creek beds, or roddons, are the low, rolling swells in this field.
(Image: © Dinah Smith.)

An ancient, fossilized landscape is slowly rising up from the fields of sugar beets and barley in England's Fens, an agricultural hub near the country's central eastern coast.

Generations of farmers have had to contend with these puzzling, gently sloping embankments ever since 17th-century Dutch workers drained the Fens, an area of low-lying wetlands.

It turns out these burgeoning hills are archaic waterways that dried up thousands of years ago. Locally, they're known as roddons.

"They're not really rising, but the land is falling," said Dinah Smith, a doctoral candidate at the University of Leicester who is conducting the most comprehensive study yet of the geology of the roddons.

"When they drained the land, the peats and the clays compacted, and a lot of the peat, once it's exposed to the air, disappears, and the wind blows it away," Smith said. But the primeval creek beds are made of different stuff, silts and sands that don't compact at the same rate, Smith explained. "That's why we see them as undulations in the field," she said.

Some research dates the roddons' genesis to the end of the last ice age, around 5,000 years ago, when rising sea levels overwhelmed the Fens, sending arteries of water snaking up over the land. The oldest roddons reached as far as 21 miles (34 kilometers) inland.

"We really want to know the mechanics of these roddons," Smith told OurAmazingPlanet. "How they formed, whether it was slowly, rapidly or catastrophically."

One thing scientists do know is that the roddons were once home to Bronze Age peoples. Archeologists have unearthed ancient footprints at one site, along with dwellings and cookware, some with food still inside.

In addition to telling tales of the past, Smith said, an improved understanding of the roddons may provide valuable information for researchers trying to predict how the Fens could be affected by rising sea levels in the future, a very real possibility in the face of global warming, and one that could be disastrous for an area that lies largely below sea level.

Such complex narratives must be pieced together one soil sample at a time; Smith travels the Fens, drilling more than 9 feet (3 meters) into the loamy ground, by hand, to extract the layers of silt and sand.

In addition to lots of dirt, Smith has dug up fossils no bigger than the head of a pin. Ostracods, the tiny creatures that formed these fossils, may be one key indicator of how the roddons formed and why they disappeared, said Mark Williams, an associate professor at the University of Leicester.

Although they're only about a millimeter long, ostracods, which resemble miniscule lobsters, are quite particular when it comes to watery real estate, Williams said. Some enjoy fresh water, others prefer brackish water, and some are partial to salty seawater.

Williams said that because thousands of years have passed since water ran through the roddons, "we're not sure of the interplay between fresh water and marine water, and one way we can determine that is to look at the ostracod patterns."

Smith's study, slated to be published in a future issue of the journal Proceedings of the Geologists' Association, covers the first and second generations of roddons. She is currently conducting field research on the third, and last, generation, and said she has only scratched the surface of the hidden world of these vanished waterways.

"This work is drawing together archeology, the environment, agriculture. It has brought so many different facets to the fore," said Smith, who has become a fixture on the Fens, wearing her waders and carrying her long metal auger for soil sampling.

This kind of hands-on science can be back-breaking work, but Smith said she loves every minute she spends in the fields, under wide open skies, digging into the past.

"The Fens are very, very special," she said.