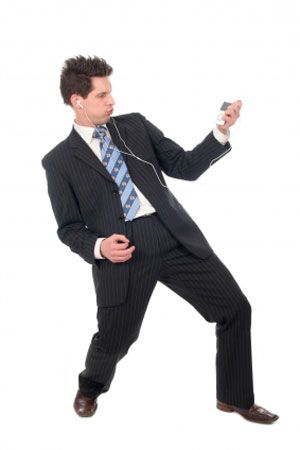 Some college students listen to their iPods at volumes that may lead to hearing damage, according to a new study
(Image: © stockxpert)

Missed that high note? With Auto-Tune, that's OK. Like a spellchecker or photo editing software can save us from our mistakes, the audio program Auto-Tune can correct a singer's bad notes and wavering pitch.

Although the program is best known for the singing-through-a-fan, robotic vocal style that has dominated pop radio in recent years with stars like Lady Gaga, T-Pain and countless others, Auto-Tune is in fact widely used in the studio and at concerts to make artists' sound pitch-perfect.

"Quite frankly, [use of Auto-Tune] happens on almost all vocal performances you hear on the radio," said Marco Alpert, vice president of marketing for Antares Audio Technologies, the company that holds the trademark and patent for Auto-Tune.

The beauty of Auto-Tune, Alpert said, is that instead of an artist having to sing take after take, struggling to get through a song flawlessly, Auto-Tune can clean up small goofs.

"It used to be that singers would have to sing a song over and over, and by that time you've lost the emotional content of the performance," Alpert said. "Auto-Tune is used most often for an artist who has delivered a fabulous performance emotionally and there may be a few pitch problems here and there . . . [the software] can save a once-in-a-lifetime performance."

Auto-Tune users set a reference point – a scale or specific notes, for example – and a rate at which derivations from this point will be digitally corrected.

This rate can be carefully calibrated so a voice sounds "natural," by tacking the voice smoothly back to the reference pitch. Or, artists can make the correction happen quickly and artificially, which results in the warbling, digitized voices now all the rage in pop, hip-hip, reggae and other types of music.

Auto-Tune's invention sprung from a quite unrelated field: prospecting for oil underground using sound waves. Andy Hildebrand, a geophysicist who worked with Exxon, came up with a technique called autocorrelation to interpret these waves. During the 1990s, Hildebrand founded the company that later became Antares, and he applied his tools to voices.

The recording industry pounced on the technology, and the first song credited (or bemoaned) for introducing Auto-Tune to the masses was Cher's 1998 hit "Believe."

Although a success with audio engineers, Auto-Tune remained largely out of sight until 2003 when rhythm and blues crooner T-Pain discovered its voice-altering effects.

Many woozy singles later, T-Pains love of Auto-Tune became iconic, culminating in a in a Super Bowl commercial last February in which the singer asks, in his signature computerized lilt, for a partygoer to "pass the guacamole."

With the salvaging of every poorly sung vocal, however, it seems the technology has made new enemies over the years, and not just in the audiophile community.

For example, rapper Jay-Z entitled a song on last year's The Blueprint 3 album "D.O.A. (Death of Auto-Tune)," and musicians including Christina Aguilera who have relied on the software have publicly blasted it.

Debates have broken out over whether Auto-Tune has cheapened or at least homogenized pop radio, and whether it has made audiences expect singers to torch through songs without vocal errors or, as some have alleged, personality.

Nevertheless, Auto-Tune has won the occasional accolade from music critics for providing a theme-appropriate sonic element. A key instance is the haunting, deadened sound of Kanye West's voice on his melancholy, late-2008 album 808s & Heartbreak.

Regardless of its artistic merits, the occasional unsubtle use of Auto-Tune has made its mark on pop culture.

Just last month, an outfit called Gregory Brothers used Auto-Tune to create a song from a local news clip. The clip featured a rant by a young man whose sister was the victim of an attempted rape in a housing project in Huntsville, Ala.

The viral video and ditty posted to YouTube, called "Bed Intruder Song," has become a Billboard 100 hit courtesy of its trilling, Auto-Tuned-to-absurdity lines such as "He's climbing in your window, he's snatching your people up . . . You better hide your kids, hide your wife . . ."

This article was provided by Life's Little Mysteries, a sister site to LiveScience.

Adam Hadhazy is a staff writer for TechNewsDaily, a sister site to Life's Little Mysteries.