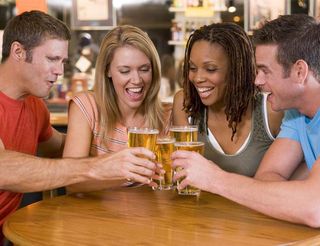 Booze may make everything look more attractive, not just members of the opposite sex.
(Image: © Dreamstime)

A new research effort takes an admittedly off-key approach in the study of why people crave alcohol and other drugs.

This method of studying how craving alters the way a person values a drug is fairly new, but according to the study, it may well help assess cravings more accurately and contribute to identifying more effective ways to defeat addictions.

James MacKillop, a psychologist at the University of Georgia, believes a behavioral economic analysis may lead to an improved understanding of the cravings.

The research was published Tuesday in the journal Addiction.

The classical perspective on the role of craving in addiction is that over time, excessive alcohol or drug use leads to increasingly persistent desires or urges for them.

Ways to use craving as a predictor of post-treatment relapses, have, unfortunately, been unclear at best.

"The role of craving in the motivation of drug users has been controversial because of ambiguous findings and challenges in defining craving itself,"  MacKillop said.

"The field of behavioral economics is a hybrid of psychology and microeconomics and has the potential to address a number of the inherent limitations we have seen in studying craving. One of the reasons for the ambiguity may be related to measurement problems. Behavioral economics translates subjective desires into more objective terms, like number of drinks consumed and dollars spent, and shows real promise in finding better ways to study and understand craving."

The price of drinking

The study involved 92 university students from the Northeast who were "heavy drinkers," meaning at least 21 drinks a week for males and 14 for females.

In both contexts, subjects related their subjective craving for alcohol and estimated how much they would drink based on an increasing price scale.

Subjects reported they would drink significantly more alcohol at low prices; they would spend more money in total on alcohol; and they would continue to drink at higher prices.

While this may seem intuitive and a matter of common sense, behavioral economic methods have not been extensively applied to understand craving in the past.

The new information may be useful, for example, in understanding the paradoxical behavior exhibited by addicts who commonly vacillate from wanting to quit drinking, smoking or using other drugs to reversing course and continuing to use.

More broadly, behavioral economics may have diverse applications to alcohol and drug misuse, from improving measurement in research to informing policymakers with regard to tax policy.

"Assessing craving using behavioral economic variables gives us a different and more complete understanding of how craving and decision-making interact," MacKillop said. "We believe this work is both interesting and exciting, and has the capacity to help us understand craving much better than we have before."

According to the U.S. Department of Health and Human Services, in 2001, heavy drinking was reported by 5.7 percent of the population aged 12 or older, or 12.9 million people.

Among youths aged 12 to 17, an estimated 17.3 percent used alcohol in the month prior to the survey interview. Of all youths, 10.6 percent were binge drinkers, and 2.5 percent were heavy drinkers.

The American Heart Association reports that in the United States an estimated 24.8 million men (23.1 percent) and 21.1 million women (18.3 percent) are smokers. These people, the group says, are at higher risk of heart attack and stroke.

Thus the stakes for better understanding craving as it relates to addiction are high.